Updated 2022-01-03 17:50 GMT.
By Damon Hart-Davis.
Learn how a thermal imaging survey can spot real problems. What does it cost? Is a trained operator useful? #thermalImaging #cutCarbon
See: Gaming your Heating for Cash and Giggles!
See also:
Thermal imaging cameras see infrared (IR), often alongside visible light. A camera uses the IR to estimate the temperature of objects in the field of view. I used a thermal camera to look for heat leaks, ie perform a heat-loss survey, and then had a grown-up in to check my work!

In February 2011 I managed to borrow a thermal camera for a few hours on a chilly evening. I wanted to look for cold spots inside, and hot spots outside. Both show that heat is escaping too fast.

(Many thanks to Chas Warlow c/o the Street Champions project and the Ham and Petersham Low Carbon Zone!)

Sometimes these cameras are described as 'thermographic'. The process of using them, eg to survey a house, 'thermography'. IR thermometers are effectively single-point or single-pixel versions.

In March I hired a professional to repeat the survey to check how effective my DIY attempt was. (And see what else might need fixing.) It cost me under £200 all-in. I was visited on a chilly Sunday morning.

Is a thermal imaging survey useful?

Yes. You'll find heat leaks that you'd never find any other way! With those extra clues you can save more carbon and money.

What are other names for a thermal imaging survey?

Can I do a thermal imaging survey myself?

Yes. Borrow a thermal (IR) camera — many local groups such as councils and green groups have them to lend. It's not much more tricky than using a normal digital camera. But look out for some of the things listed below that are easy to miss if you're new to it all!

Probably. If you can find someone who knows their stuff they'll probably find things that you'd miss, and know what's important and what isn't.

When is the best time to do a thermal imaging survey?

Generally when it's cold outside and you have the heating on. (But you could try when it's hot outside and the house is cool.) The bigger and steadier the temperature difference between inside and outside, the easier the job will be. 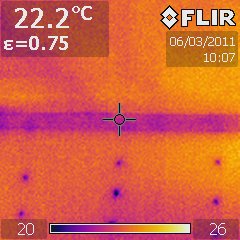 My amateurish attempts, and Sustainable Lifestyles' (SL) more practised eye, both discovered big problems such as the cold front door and loft hatch. Equally, both of us could see that our house is doing quite well, losing a lot less heat than neighbouring properties. Though it turned out that I was too complacent. I should have worked harder to pick out other issues. 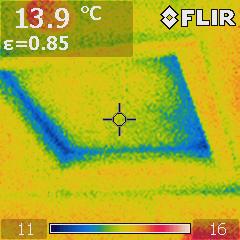 One interesting feature that stood out dramatically in both surveys was the (expected) thermal bridging of the aerogel drylining in our living room with the steel fixing screws. With some styles of rigid drylining such as Kingspan K17 where dot-and-dab adhesive fixing to the wall is possible, such bridging can be avoided.

(Thermal bridging is where heat finds a short-cut to leak through walls, window frames, and so on. It doesn't matter how good the rest of your insulation is because a bridge can bypass it!) 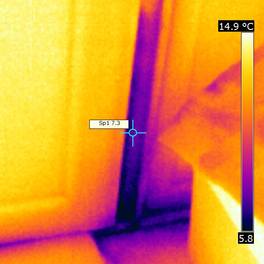 Even though the loft hatch has been draft-stripped, and I glued some insulation to its top side (the box for a small solar panel with its expanded polystyrene packing) it remains a clear weak point thermally. It may be possible to make a backing from some of the left-over aerogel. Something should be done about it in any case.

The fact that our newly double-glazed front-door would still be relatively cold was not astonishing, nor that our door curtain is still useful to have. But possibly the colder external temperatures and a bit more slippage since my own survey made the effect of the poor seal at the door's foot rather dramatic in SL's survey. This time I was nudged to investigate. (In the end a catch needed to be re-tightened to fix the problem.)

The FLIR Systems b40 that I used was small and light and easy to use, at least at first blush. With some fiddling around I was able to get the images onto my Mac when I'd finished my survey, making use of the removable memory card and a reader. (I seem to recall so anyhow. The device was not recognised over USB.)

The thermal camera is deceptively simple point-and-shoot but with some caveats:

If intending to DIY you need not be put off. But you should definitely give yourself plenty of time to work through the camera modes and features to get the best out of it. At least several hours. Also, try to use the camera on a pretty cold day to maximise the visibility of heat leaks.

Things that I had Missed

SL did spot many things (often subtle) that I'd overlooked such as: 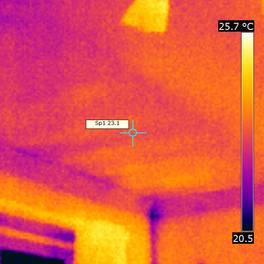 There seemed to be a consistent and unexpected pattern of infiltration above the ceiling from the east/west walls to the first transverse joist in all rooms, and consequent heat loss. Above the first-floor ceilings, since there will have to be some ventilation of the loft space to avoid moisture build-up and rot, that may be partly unavoidable. But downstairs it may be fixable. And I'm particularly keen to avoid it in the living room which we have gone to huge trouble to superinsulate and make the "warm refuge" room for winter.

This '60s house's external walls were probably not designed for air-tightness. So some infiltrations/leaks are not at all astonishing. Some ventilation is needed to keep the structural elements dry. But possibly we could make some special effort in the living room without endangering the building fabric. And in particularly cold spots elsewhere.

I suspected that the current loft boards would be a weak point thermally. Though I could not see it on my own survey.

(There are boards for a small amount of storage above the small rear bedroom. Also for safe working access to the solar PV inverters in two places.)

Not only did the SL survey show that fairly clearly, but also really dramatic holes in the existing glass/rock wool insulation. Presumably where both the first and second rounds missed areas. These are typically at hard-to-reach external edges and corners.

It's also clear from the SL survey that in several places joists are thermal bridges, cooling down the strip of ceiling directly beneath them. That will be hard to do much about right at the ends at external walls. But the rest in the first floor could be improved by better and more consistent insulation above them in the loft.

Heat Loss from above Windows 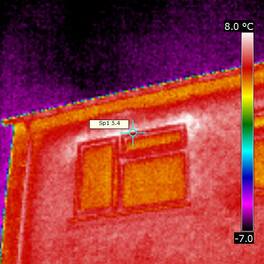 This was something that I had not noticed at all during my survey. It would be worth at least a simple investigation if it can be done without too much mess or cost or disruption, just to see if something as simple as squirty foam would help. Eg stopping unwanted air infiltration and convection beside and above frames.

A survey doesn't necessarily cost anything if you can borrow. Not much even if someone comes round to do it for/with you. So it is quite likely that you can recoup your time and effort in energy savings reasonably quickly. And it's interesting!

Even if you rent your home, you may be able to get a survey for free to show you some improvements that you can make yourself. Then hand the survey results on to your landlord for the rest!

I'd recommend getting in someone familiar with the equipment if you can. It really isn't quite as point-and-click as a normal digital camera. Even though it almost seems to be.

Renting a thermal camera may cost no less than getting the expert to bring their own and do all the leg work. Thus it may well be worth getting the trained brain along too.

None of this is to say that my own initial survey was a waste of effort. Indeed at the very least if I do a repeat in (say) a year's time, I'd have a better idea of what to concentrate on.

2011-03-07: the SL survey pointed out that our new front door is not sealing properly at the bottom, so I asked the company that installed it (Warmlite) to come and adjust it. Done 2011-03-11 in two minutes—a catch needed adjusting—for free.

I'm getting the loft insulation gaps sorted out and insulated loft boards put in to replace the current standard ones.

As a longer-term project I'll think about reducing the air infiltration above each ceiling. (Especially that of the superinsulated living room.) I'll be careful not to set myself up with condensation/rot problems for the house's timber frame.

(2011-10-21 note: when re-plumbing the rads in the rear bedrooms, now both hung on the internal partition wall to reduce direct external heat loss through exterior walls, the builder squirty-foamed the space to the outside wall to reduce infiltration at least from that section and around the radiator pipework which could be especially significant for heat-loss.)

Another project would be trying to fix the heat loss seen above the windows. Maybe it would be possible to take out the reveal and do some simple remedial work such as foam filling of gaps and so on. And if we are ever replacing windows outright then we can pay extra attention to thermal bridging and losses around the frame.

(2011-10-04 note: when drylining the exterior wall of the rear bedrooms, the builders added lashings of squirty foam around the windows. There was quite a lot of air penetration, ie huge gaps you could stick a finger through, which may explain heat losses seen in the thermal imaging.)

Ban the energy monsters and vampires in your house from the comfort of your living room. Know what is eating your cash! #frugal #cutCarbon

I tested a number of clip-on energy meters. I liked the Efergy Elite.