9th October 2020, for stats from July to September.

Turn-of-the-month update of home energy and related stats, and poking at data from 16WW and beyond.

Heating degree days (as used for 16WW, with a base temperature of 12°C) are nothing special for the three months, compared to previous years. Interestingly, July accrued more than 1HDD, which hadn't happened since 2008. Not quite evidence of global cooling though!

(In line with more 'normal' weather, PV generation was in normal ranges too, with September at 13kWh per day, for example.)

Electricity and gas consumption had risen a little under lockdown, but with both kids back at school full time in September, demand is largely back to normal, at about 5kWh and 4kWh per day respectively.

Demand didn't dip as much as usual though, this August, since instead of a fortnight away we took a single week UKation in Weymouth. The Enphase battery and PV did their jobs and there was no electricity imported in our absence, along with no gas burnt, as expected! This reveals true baseline energy draw, with an empty house ticking over, of somewhat under 2kWh per day of gross electricity use, over half being the fridge/freezer.

The shoulder months such as September and March could make good use of an additional 1kWh/270W of Enphase ACB, to improve self-consumption and reduce grid flows, with their attendant losses. I hope to simulate that, to see what difference it would make, and trade off against standing losses of the additional unit.

(See the saving electricity and gas 2020 page on Earth.Org.UK for the complete month-by-month breakdown.)

A new paper, Providing decent living with minimum energy: A global scenario, suggests final energy for decent living (DLE) ... in 2050 of about 4MWh per person per year which is not hair-shirt stuff, but for example includes 50l of clean water supplied per day per person, with 15l heated to a comfortable bathing temperature; ... an air temperature of around 20°C throughout the year, irrespective of geography; [] a computer with access to global ICT networks; [] linked to extensive transport networks providing 5,000 to 15,000km of mobility per person each year via various modes ... universal healthcare ... education for everyone between 5 and 19 years old ... and so on.

At 16WW the direct energy demand for the four of us, ignoring PV generation, is about 2MWh/y electricity and 3MWh/y of gas (higher in colder years). With PV those net out to about zero. Maybe all our stuff and food and travel and Internet etc does fit within 4MWh per year each. Are we living a sustainable 2050 life in some aspects already?

Some of that future DLE mobility would likely be used for shopping, though who knows what 2050's will be like? The shopping experience for customers and retailers has been changing significantly this year.

In April's statscast Sainsbury's CEO said that customers were coming less frequently and are buying about twice as much when they do come.

Now (via HL and BBC) Tesco tells a similar story: customers made fewer trips but bought more on each visit, with the average basket size increasing by 56% and Tesco more than doubled delivery capacity to 1.5 million slots a week during the first half, including serving 674,000 vulnerable customers.

In other episodes I've turned data into sounds or pictures (eg graphs). Sonograms, AKA spectrograms, show sounds as pictures.

It's interesting how shuffling data around between our senses can help reveal interesting features!

It turns out that 16WW is in a bit of a bat hotspot.

Bats tend to flit around at twilight, when we can't see them very well, and make ultrasound that most humans can't hear.

So to better understand bats we transform what they do into a range that we can perceive.

A 'bat detector' will, as a minimum, usually shift the bat echolocation and social calls several 10s of kilohertz down into (adult) human audibility.

But these calls can also be shown as plots of amplitude and/or frequency against time, which can help identify bats by species, and how 'social' or aggressive they are feeling. The pattern of peaks in the amplitude, and characteristic streaks in the frequency plot, provide many clues!

It is also possible to plot the bats' movements over a map. 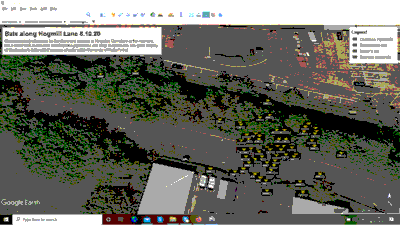 Really clever bat detectors running on a powerful tablet can do more than one, eg plotting bats' species and movements.

Here is a short segment from the edge of the nearby Hogsmill River (in its unglamorous urban concrete channel) where there seem to be two different bat species feeding (roughly first and second halves of the clip):

Here is a minute of minute bats' chat from the Hogsmill, just from the frequency-division channel of the Batbox Duet, cleaned up with a 1500Hz to 7500Hz bandpass filter:

All fascinating, and I've only being paying serious attention to these creatures for about a month! I'm documenting what I see and hear (and visualise) on my Bats Around our Home page.

OK, I confess that the first mystery noise is a mystery to me too! I think that I activated the field recorder in my pocket by accident while walking through London.

The second one you may now recognise as a bat, in this case a common pipistrelle I think, as bat detected from my front window by my desk, just on the frequency-division (FD, /10) channel:

Segment from beside the Hogsmill with two different bat species:

Second mystery noise which is a common pipistrelle on the bat detector as heard from my desk, just the frequency-division (/10) channel:

A fiddling-round-the-edges month... I've verified that https adds significant page rendering latencing (~150ms) even for clients in the UK.