Updated 2021-12-14 07:36 GMT.
By Damon Hart-Davis.
Cuts bills and footprint, educates children, and makes good use of roof space! #microgen #solar #PV
See: On the JProfiler Java Performance-tuning Tool: Review (2012)
Solar power and schools are a good match. Helping protect budgets from energy price rises on one hand. On the other, supporting science teaching on energy, climate change and the environment. Here's how I was able to help out our local primary school, attended by both my children.
See also: 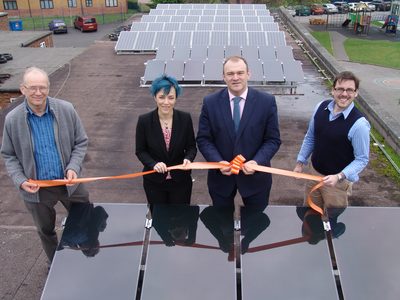 I was very pleased in 2012 to help organise a PV system for King Athelstan Primary School. KA is the local community school that both my children attended. I was quoted:

Solar power is good for the school, for the surrounding area, and for the planet. Having solar power means that we can burn less gas and coal to make electricity for the country, leaving more for other important uses and reducing the threat of climate change. King Athelstan putting its roof to good use!

Even better, our local MP, Ed Davey, was able to come and declare it officially 'on'. He was Energy and Climate Change Secretary of State too. That made some good PR for the school!

King Athelstan's installation is solar PV, ie for electricity. It should cover about 10% of the school's consumption over a year. It will reduce the need to import from the grid during summer daytime, weekends and holidays especially.

Conservation remains important. I hope that we can halve electricity (and gas use) or close to. That would have the effect of the PV then covering 20% of electricity consumption...

For other schools, eg residential, a solar thermal system to contribute to hot water supply may also be useful.

A (prettier) snapshot of electricity use vs the first summer's generation (c/o EnergyDeck): 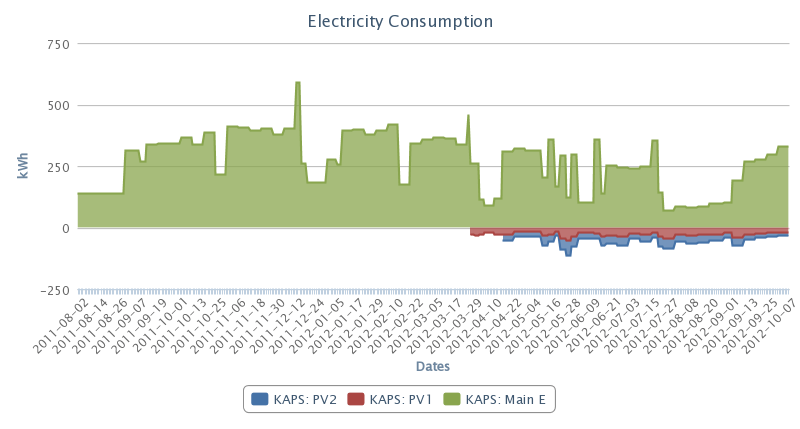 I used to love all the exhibits at the Science Museum in London where I could push buttons and pull levers as a kid. I'm hoping to put together some very simple exhibits King Athelstan and other local schools to use where kids can cover/uncover solar cells and watch meters twitch and motors whirr. Hardly likely to greenwash the children. But may generate a little interest along with the watts. I remember that my dad got me hooked on electronics with stuff not very much more complex! 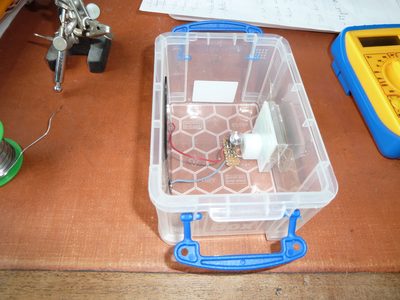 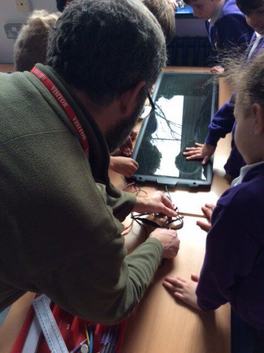 The cell and meter are in a clear plastic box stuck to opposite sides. Covering the cell with a hand has the meter drop back to zero. To get FSD (full-scale deflection) at (say) V=2.5V implies a 10kΩ series resistor. The meter can probably stand 100% overcurrent for a while. So a resistor value close to this or a little higher is probably fine. It will allow decent needle movement even if not in bright sun.

I've put a 3.3V white LED upstream of the meter, as a voltage limiter, with a further 470Ω to the solar positive. So if the light is really bright then the LED comes on and limits the meter to FSD.

Even though generating is good, avoiding waste is often more effective. Particularly in terms of the amount of CO2 saved per £ spent. In SWLEN's 2017-09 report Wasted Energy: how money and carbon dioxide could be saved in schools: it is noted at the end that [KA] reminded to turn the heating to a frost setting over the Xmas / New Year holiday period saved around £500. All for about 10 minutes' work!