Updated 2021-08-06 09:54 GMT.
By Damon Hart-Davis.
Find out why I have solar panels on my garden wall as well as on my roof! #podcast #solar #garden #microgen
What are the panels in my garden (AKA back yard) for and do I run my toaster off them? No, but I run my Internet server and laptop from them instead! (Alison F asked me to create a couple of recordings about green features of my house: here's the first.)
See also: 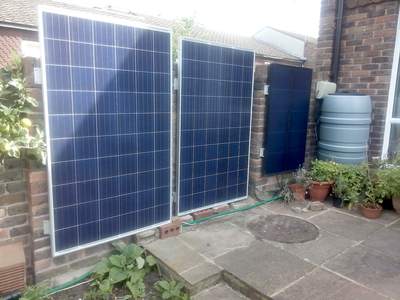 I was asked You have solar panels alongside your fence: I would like to know more about the considerations you made for this and whether you need a separate inverter.

The solar panels that I have on the roof feed power into the mains, which is great for powering gadgets and appliances during the day. I recently added a mains battery that holds on to some of that solar juice we don't need during the day, to run lights and TV and fridge and so on overnight!

But there are some things that I'd prefer not to take power from the mains for at all, and until I bought the new mains battery, I would have had no way of powering those things overnight other than with mains.

For that I have a completely separate "off-grid" system, with its own panels and battery and battery controller (rather than an inverter). From that I can power some small lights, the server for my Web site, my laptop, and other bits and pieces. The big panels on the fence that you are asking about are part of the off-grid system.

One feature of those panels is that they point due south. The ones on my roof point east and west. The combination makes it easier to soak up sunlight all day long especially in winter. Those panels also act as handy privacy screening, since what they are on is rather low!

The big panels were an experiment to see if I could make a significant difference to the total solar energy that I collect in the middle of winter, and so far the answer is "not really", but I'm continuing to try!

When the big panels are getting lots of sun on a bright day my system automatically transfers a couple of gadgets, such as my Internet router, from being mains powered to the off-grid system. Sometimes those gadgets can stay off-grid all night too.

There's lots more on my "Earth Notes" Web site at Earth.Org.UK about all of this.