Earth Notes: On Smart Heating For Small Buildings in the UK (2012)

Updated 2021-07-04 19:10 GMT.
By Damon Hart-Davis.
What would be 'smart' heating circa 2012 for our homes, schools, community centres and shops?
See: On the Project CHARM Conference (2013-02)
Asked to summarise at a Department of Energy and Climate Change (DECC) workshop 2012-10-30 how we could make heating smarter in the UK and reduce its carbon emissions, this presentation briefly surveys what tech was then available and what could be done better, especially in the home. This lead to OpenTRV development, and to Radbot.
See also: 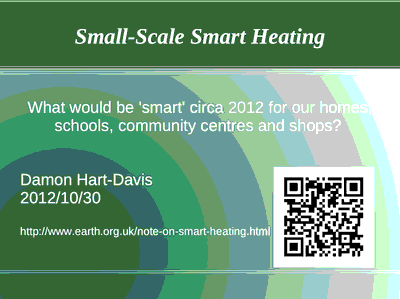 This note looks at what we could do to 'smarten up' heating circa 2012, for UK homes. Also for small premises such as community centres, small retailers, schools etc, including:

This is informed by trying to make my own modest ex-council house more efficient. It's now a "SuperHome". Also from working on energy consumption from the school at which I am governor. Also interesting knotty problems for which help was sought on Internet fora. These are all cases where there are unlikely to be dedicated facilities management staff being hounded by a CFO and the Corporate Responsibilty supremo, nor direct contracts for balancing services with National Grid. So relatively simple robust systems are the order of the day.

There is a host of potential reasons to smarten our heating systems. From strategic national level to personal tactics for warm toes and fingers. Not all components will support all of these. But like the best distributed algorithms can pull in the same general direction.

We have many tools ready to use at the domestic / small-building scale:

Avoidance also includes behaviour changes and user education. From keeping a house cooler and wearing more layers in cold weather, to keeping shop doors closed as NYC has insisted on for many years.

There is still significant heating with no thermostats (or only safety stats), such as open fires and cranky old central heating systems that are on or off. They rely on subjective and annoying manual intervention for operation.

The next step up is thermostatic control of individual heating devices. Think forced convection fan heaters and oil-filled electric radiators.

Beyond that is a single master thermostat for a building, eg a house or school, with possible unbalanced heating though a large/complex space, though often still with more efficient (in exergy terms) heating sources.

Adding back some local control with radiator TRVs, zoned or per-room thermostats, and even occupancy-driven multi-level setback temperatures, can increase heating efficiency and local comfort too. All these are available off-the-shelf at domestic scale upwards.

(In future it may be possible to drop to setback heating and lighting settings more aggressively during grid peak demand/price/intensity periods. Or indeed as part of frequency and short-term response. Thus shorten times to decide areas are unoccupied and which equipment unused, and also trim energy demand of those setback levels a little.)

Weather compensation (running the heating harder when outside is cold) is somewhere between thermostat and anticipation in sophistication.

Some of the most effective basic savings are from turning heating off/down when people are expected to be absent or asleep. That is, time controls, often on daily or weekly cycles. They may prove less useful for people on shifts, and often require at least seasonal adjustment. Not to mention occasional manual overrides for holidays, late meetings, etc. Some time-programme functionality could be replaced or enhanced by occupancy sensing. Plust some fast (eg radiant) heat for when people are unexpectedly up and about.

Timeouts are an engineer's friend too. How long before occupancy is detected should heating be kicked on? How soon after expected occupancy doesn't materialise should planned heating be cancelled? (All depending on heating types available.)

The boost button is a simple concept and widely depolyed such as an "I feel cold button" for force the heating on/up for half an hour. Or an "I've got guests" button to boost DHW heating for an hour or a tankful.

Predicting when heat will be needed allows slower-reponse systems such as UFH or radiatiors running at lower temperatures to be used. These in turn are potentially more efficient in 'exergy' terms, eg heat-pumps can be run with a higher CoP to deliver the same heating comfort. Clearly, in all sorts of other ways predicting the future can be valuable.

Remote control of heating is potentially useful for irregularly-occupied spaces. Thus averting the real horror of people leaving heating/air-con on for an entire holiday so that the first hour back will be more comfortable. In this case the human is doing the anticipation explicitly, but easily, from their mobile phone while en route home maybe.

What you can't measure you can't manage. Thus an important element of any smart heating system puts the human back in the loop with feedback. From In Home Devices (IHDs) for smart meters and home energy management systems showing 'how much am I using now', to also 'how much compared to this time yesterday and last week' and 'did doing things this way save money/carbon?'

It would be good to find a away to help people tune their heating performance against HDD (Heating Degree Days) in-home and without feeling like an engineering test. Such sites as iMeasure already provide the tools.

Storage of heating energy in the home, from concrete thermally massive interiors to the DHW hot water tank to possible battery packs upstream of a heat-pump, can all potentially load-shape demands on the grid, make better use of local and remote intermittent sources, reduce end-user cost and increase comfort.

There are pros and cons: a thermally-massive interior keeps temperatures stable and potentially allows use of very efficient high-CoP heat-pumps for example. But such structures need a lot of anticipation unless run continuously, which may be inefficient. My thermally-lightweight house can be warm in half an hour from chilly if need be. And our bedrooms need only be warmed shortly before occupation . A DHW tank incurs storage losses that may be significant (would be ~25% of consumption for us) but is an enabler for solar thermal and heat pump.

Use Cases and Testable Improvements

In my house, on top of more aerogel drylining and MHRV, I'd take the smart wireless TRVs and occupancy sensors. Why? So that rooms that people are in (and stay in for at least a few minutes) are warmed. We'd dispense with a single thermostat for the house. A simple upgrade with LightwaveRF's TRVs (but no occupancy sensing) might be £180 total to get two soft zones. (£60 for boiler control to replace existing building thermostat then £60 for each room for TRV + thermostat at £30 each. Plus optional magnetic door/window catches at ~£25 each to avoid calling for heat with windows open.) Normal TRVs would be left on other rads to continue to scavenge heat as now.

The school likewise could do with software zoning and (child-)tamper-proof TRVs and possibly CO2-driven MHRV to avoid air getting stale and windows opened even in the depths of winter. If those TRVs shut down when windows opened, even better. Door closers on all exterior doors are on the list to do, too.

Occupancy sensors might also help selectively warm rooms where staff are working late. Better than chasing them out of the main building as we are now by turning heating off just before the end of the school day! Software zoning could also help with responding to after-school bookings efficiently. As could some more automatic anticipation then the half-hour extra-early start we have programmed in for Monday mornings! We have provided small thermometers to each room with a suggested 18°C target. We have also suggested keeping TRVs on low settings all the time to avoid overheating (see community centre issue). Too early to tell results yet, though HDD-normalised monitoring with sMeasure last year spotted a boiler control panel going on the blink before the building manager did...

A modern-ish community centre with a single-heating-zone and radiators has people turning TRVs to max then opening windows because of slow response. Suggestions to reduce heating bills include making each room a soft zone with wireless TRVs, etc. Adding an initial burst of radiant heat so that people feel warm instantly (such as from electric radiant sources) may help too. All can be driven by occupancy sensors. (Maybe have a further setback to frost stat out of hours, so a 3-level scheme.)

Less-regular parts of usage patterns add difficulty and complexity. Think of a shift-worker, half-term holidays at school, and paper-based irregular bookings for a hard-to-heat community centre.

In all cases, before and after monitoring of HDD-normalised heating efficiency, bills, and satisfaction 'soft' feedback reports would be a minimum.

Help your visitors and improve your Web pages with a live GB grid carbon-intensity button/widget/avatar: 32x32, 48x48 and 64x64 sizes.