Updated 2021-12-11 15:51 GMT.
By Damon Hart-Davis.
We got a bigger better greener TV that saves us a tenner a year!
See: On the WV1 window vac: Review
Getting a huge TV doesn't make the content any better! We looked for an upgrade that would be a sensible size and would neither take too big a bite out of our bank balance nor have a silly carbon footprint.
See also:

Bigger and Better (and more Frugal)

As of 2011-09 my partner's 13" Sony Trinitron CRT TV was about 20 years old. Still working, but she wanted a new one. And I'd take the opportunity to trim some of its power consumption, about 0.5kWh per day typically. That's about 70W including the small separate SCART/UHF converter for the DVD player. A good low-power TV would be a greener choice than just going for the first TV with a pretty bezel that we see! 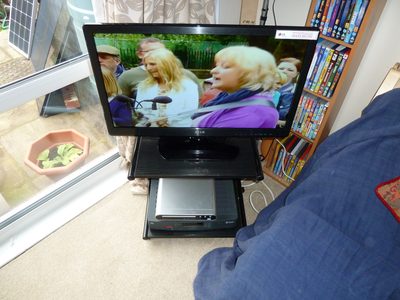 We don't have a huge living room, so 22" or 24" should be plenty large enough. With an LED-backlit LCD model then power consumption ~50% lower than the CRT seems to be possible. A well-integrated DVD would reduce clutter and could remove another small parasitic standby draw.

As of today I had the following list of possibles plucked mainly from the Argos catalogue (* for integrated DVD player):

A visit to Sony today and Argos a little while ago suggests to me that our 'on' consumption budget should be about 40W max for a TV. I think that that is roughly 'B' rated or better. So 50W (ie an extra 10W) for an integrated DVD. 10W is what their simplest stand-alone DVD consumes and a bit more than ours. That should get up to about the 24" or 26" size that my partner would like.

~40W for the TV would save us ~0.1kWh/d or about the energy used by our ADSL modem. We might be able to get to under 30W for an A-rated device.

The chap in the Sony shop says that Sony has stopped doing integrated DVDs because they break before the rest of the TV. So possibly wise words there suggesting to keep them separate.

Our old TV is failing today (contrast is going). So we are ordering from Amazon a LG 26LS3500 26"/66cm LED-backlit 1280x720 LCD TV for £214.49 plus a modest delivery charge. It has a claimed 29W in-use consumption (about half that of the old CRT) which may save ~0.25kWh/day. The 15W taken by the PACE cable box is even more glaring. Especially given that the standby on the TV is ~0.3W whereas the cable box only reduces by about 1W!

Note that the size (26") is more than I had thought useful. But Jean had seen a couple this size in other houses, and bigger ones had seemed just too much. This one is as good as I could hope for on the power front. (And I suspect that controls can be tweaked to do better than default.)

I remain slightly wary given LG past form on energy ratings. I shall measure rather than just take on trust.

The TV arrived today and after an abortive attempt to set up was fine. Comes with an Eco 'Auto' mode by default. In 'Auto' mode I took the following approximate energy consumption values for our new combination of Lime plug to power everything off, TV, PACE cable TV box, and DVD player:

All these readings seem to fluctuate a bit. The PACE box seems to need to be turned on and and explicitly put back into standby after power up to achieve its 1W 'standby' saving.

These measurements were taken before enabling the "Intelligent Sensor" which adjusts the TV brightness depending on room brightness.

Note that the measured ~0.9W TV standby is noticeably higher than the specified "<0.3W" value.

A visit to the Homebuilding and Renovating Show, 2011: eco- or bling- driven?

Yesterday (2011-06-26) I helped out on the Solartechnics / PSG Solar stall at the Homebuilding show at Sandown Park in Esher (on a very hot and sunny day).