Earth Notes: On Our Front Door Upgrade to Double-Glazed

Updated 2020-08-06 07:22 GMT.
By Damon Hart-Davis.
Learn about the pros and cons of upgrading an old single-glazed (front) door.
See: Gaming your Heating for Cash and Giggles!
Keeping heat in and drafts and noise out were big wins from our new front door, with no need to break the bank.
See also:

In 2009 in our 40-year-old house the only single-glazed area was the front door and side-panel. The blanks were a single sheet of plywood, and so very weak from an insulation point of view.

Also we had a cat-flap in the door for our cat Sidney. But as he was no longer with us, that leaky portal was no longer needed. (We passed on the old cat-flaps via FreeCycle.) 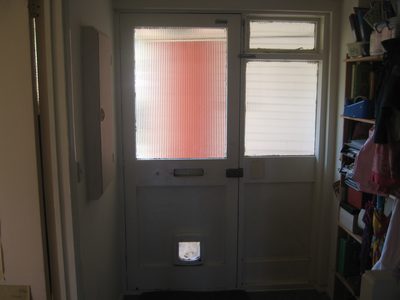 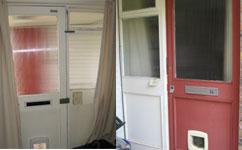 We had tackled these issues with a door curtain across the entire frame. We added a nylon-brush draught excluder on the letter-box, We also kept the corridor/hall behind the door mostly unheated using using a TRV (Thermostatic Radiator Valve) usually turned right down.

In any case we'll be keeping the door curtain and the reduced hall temperature. And whatever new door we put in will have an built-in letterbox draught excluder.

My 2009 plans were to cut heating requirements by improved insulation, to the tune of 2MWh (2000 'units' or kWh) per year, even for a cold winter. Given our SAP energy survey workings and the nominal £2k/MWh/y in energy savings/capture that a solar thermal (hot water) system costs, the implication is that it would be worth ~£250 to halve heat loss through our front door and surround. (£500 to stop it entirely.)

It is just about possible to buy a replacement uPVC double-glazed door for that. But the single-glazing-and-plywood side panel would still need to be seen to. And if we don't have it professionally installed by a 'Part P competant person' then we'd need to pay for building inspection. (Plus some security and safety risks if I bodge a DIY job.)

If you use a company registered with the Fenestration Self-Assessment Scheme (fensa.org.uk), they will get the necessary certificate of compliance. Building regulations also stipulate that all windows, except those in conservation areas and listed buildings, must have a certain thermal efficiency value (a "U value") to reduce heat loss. The lower the U value, the better. Single glazing is 5.5, while standard double-glazing is around 1.8.

To really bring down the U value, it's worth getting double-glazing filled with argon gas. "It won't detract from the look of your windows," says Steve Hill. "But it can bring an 80 per cent increase in energy savings compared to single glazing, and a 45 per cent saving against ordinary double glazing."

We obtained estimates from three local firms (one part of a national chain), all FENSA registered. They ranged from about £1200 to £2000 and proved not to be terribly sensitive to, for example, the window insulation (U-value) performance. (A wrinkle is that as of 2009 doors and panels don't yet seem to have official energy ratings A--G or U-values, else I'd have selected the best there. Plus these numbers would be complicated by potential useful solar gains not really applicable to us in an east-facing largely-sheltered porch.)

In any case, my aim is to maximise the insulation (and minimise the U-value) since it makes relatively little difference to the final price. So part of our specification is for foam-filled panels, and warm-edge gas-filled double-glazed units.

There is some argument about the thermal and environmental pros and cons of the various available materials for a new front door. Also on the impact on price and life and maintenance requirements.

For example, uPVC requires significant fossil-fuel and energy inputs and can be difficult to dispose of properly. (For example, low-temperature incineration produces dioxins.)

Sustainably-sourced (eg FSC) wood could be good environmentally and for disposal at end-of-life. But it may require more maintenance and deliver poor insulation performance.

GRP (Glass-fibre Reinforced Plastic) can be prettier. But it doesn't seem vastly different to uPVC except in price. 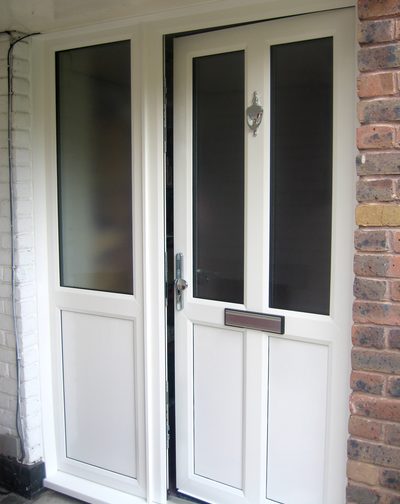 In the end we selected uPVC as the most economical solution (by ~30%). We didn't see very clear environmental reasons not to.

We selected WarmLite's quote (£1235 inc VAT) for supply and installation of the new frame/door/panel (and removal of old), with Argon fill warm spacer bar glass elements to maximise thermal performance.

The door was replaced in a few hours on the morning of 2009-07-20, efficiently and professionally.

All gaps around the new door seem well sealed. But note that for the (double) door seal to be fully effective the multipoint locking needs to be enabled. It holds the door flat to the frame in several places.

WarmLite took a £300 (cheque) deposit when we signed for the door. The balance was due by cheque on completion.

At around the same time (and indeed completing by chance on the same day) we had the door from the living room refitted to help heat retention in winter. (It was not present when we moved in, and last winter we used a door curtain.) Along with the anticipated reduced draughts from the front door, I hope that comfort in the living room will be noticeably improved on cold and windy days, thus reducing heating demand too.

The new livingroom door is just a simple cheap primed/unpainted wooden door (and handle) from a local DIY chain, purchased and fitted for £145 total. When we redecorate the rest of the room shortly, the door will get its lipstick!

(As of September 2009 our younger child is moving on from gentle crawling to "vigorous" exploration and that door is going to get a lot of attention. It may also help avoid him "escaping" from sight too often. We're using a push-on rubber anti-slam device to save his fingers, along with a plastic door-wedge to avert slams when we want it to stay open.)

With the superinsulation of our living-room to a wall U-value of just over 0.2W/Km^2, I've been looking for some time to replace its leaky and creaky double glazing which the SAP calculations assume to have a U-value of about 2.7/Km^2.

I've being trying to get sensible quotes from local and national suppliers for some time, struggling in part to explain that I don't care much about centre-pane U values, only overall performance.

In both cases I wish to minimise whole-unit U-value, below 1W/Km^2 for the window and as good as we can get for the doors. We're currently white uPVC.

As of 2010-08-28 the first quote to explicitly meet my spec has been from Rawington with the Uw values totalling under 1 across french doors and fixed window for an all-in price (eg including fitting and VAT) of a bit under £500/m^2. So congratulations to them for being the first to actually meet (and exceed) my specification explicitly.

From Rawington I note a 20% performance penalty for the door compared to the fixed window, which seems reasonable to me. I'd hold other suppliers to something similar.

In May we had Warmlite do an 'emergency' replacement of our main patio doors with Ug=1.0W/Km^2 with SolaGlas Climacontrol Vertical french doors. These seem sufficiently effective that, for example, on 2011-10-17 7am, while there was condensation inside the older adjacent doors there was condensation on the outside of the new Warmlite/SolaGlas doors.

Are you leaking all your warm air in winter, and losing your cool in summer? Find and fix unplanned ventilation... #frugal #cutCarbon

A big issue when making existing houses more efficient for heating (and for cooling, though less often an issue in the UK) is the loss of heated (or cooled) air through unplanned ventilation. Such as an oversized hole hacked in the wall by a plumber to make their pipework job a little easier. Or your pretty but rattling old Victorian wooden sash windows. Here's how to mind the gaps...