Updated 2022-06-25 14:22 GMT.
By Damon Hart-Davis.
See data collected in and used for our home (16WW) and elsewhere, open for research use. #dataset
See: On Website Technicals (2022-06)
A selection of data collected and used, especially at home (16WW). I intend to organise and collect more of it here, and graph it (and show the tools to graph it).
See also:

Some of the data is marked up with HTML5 microdata schema.org/Dataset. The intent is to "start with the basics" as suggested by Google, including 'DataDownload' and 'license' information where possible. (This mark-up is checked with Google's Structured Data Testing Tool.)

See available datasets for others.

I've collected much data for our house at 16 Willingham Way (16WW) referred to in the various documents on this site. Much of that data is structured and machine-readable.

The bulk of the data can be found here and is browsable, in simple text formats such as CSV. Common compression techniques have been applied for larger/non-live data sets.

Other available datasets (eg shards of this overall 16WW dataset).

Unstructured and Other Data

To set a baseline and understand better what needed fixing, I had SAP, air-leakage and other tests done in early 2009.

This data is collected a year at at time, though there is a chart for the whole data set, and collated daily kWh generation records with smoothing. (See the gnuplot commands.)

2009-02-10: the second phase was installed, taking the system to 3.87kWp; same panels and inverters for each of the two new east-facing strings as for the first phase.

Rob Ferber of ElectronVault wrote to me looking for intra-day generation data (with 10 minute sampling intervals). I had at that time exposed very little because of data-cleanup issues. (Such as bizarre time offsets in the Sunny Beam apparently attempting to correct to German civil time even though I keep it on UTC, serial numbers, corrupt data, slight drift of Sunny Beam from true UTC, etc.) 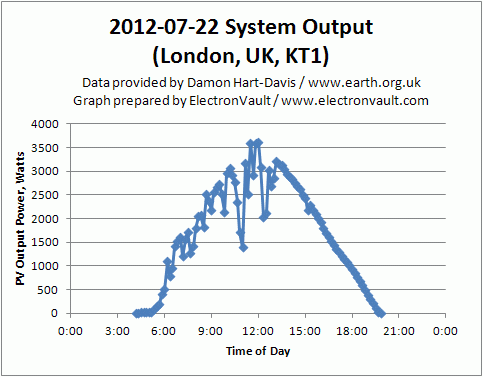 I capture these intraday samples manually after dusk about twice per month. Sometimes also I capture data on particularly 'interesting' days, of late using the SunnyBeamTool c/o Michaël Peeters on my SheevaPlug (and now, as of 2014, Raspberry Pi B+) ARM Linux system. I didn't do this continuously because I have not been able to stop the Sunny Beam apparently drawing considerable power via the USB port, and because the SheevaPlug didn't have a 'spare' USB port: I manually disconnected the USB I/O board temporarily to connect the Sunny Beam. (As of 2014-07 experimentally I have the Sunny Beam plugged in permanently, and take 5-minute samples during daylight hours.)

Rob produced lovely tweaked graphs from my raw data up to September 2012. Thanks, Rob: great job!

The entire raw data set is now available, including new samples as I take them, though with many caveats (beware timestamp wobbles in particular).

Here is an extract of the numbers from the PVGIS estimate not knowing anything about our local trees, etc!

Note also that adding just 10% (~500Wp) vertically mounted south-facing PV would add about 1/3rd to mid-winter generation from the main array (ie ~1.6kWh/d actual from the roof and ~0.5kWh/d from the new array predicted.) 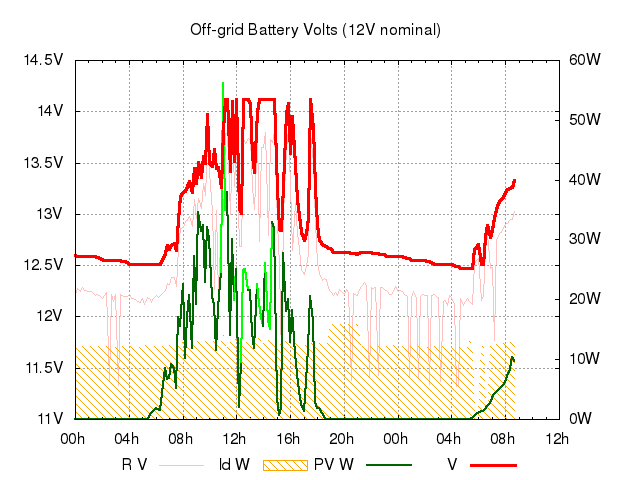 I log some aspects of my off-grid system such as live values for voltage, calendar month chart, and historic stats. 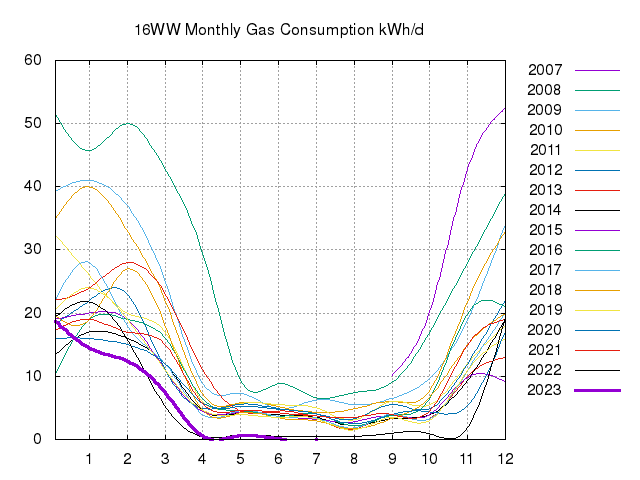 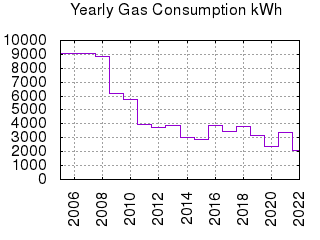 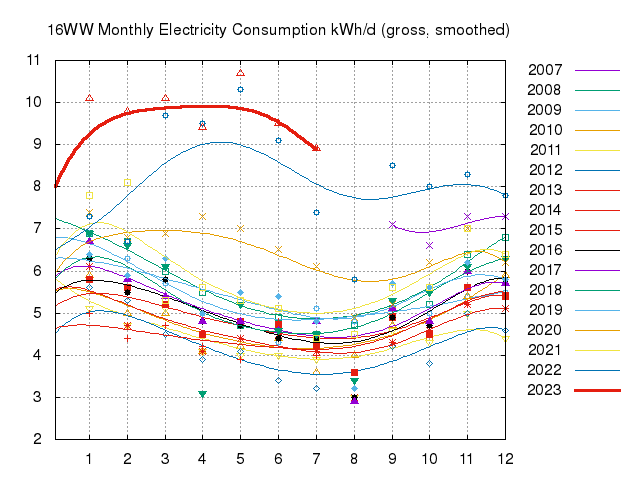 Gross electricity consumption, ie compensating for microgeneration from PV, as if the PV were not there, in monthly kWh/d, suitable for gnuplot to digest. (See the gnuplot commands.)

Note the abnormally-high electricity consumption during the pandemic lockdown, roughly March 2020 to February 2021, that final month being the highest ever. 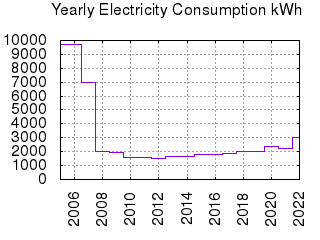 Footprint From Electricity and Gas 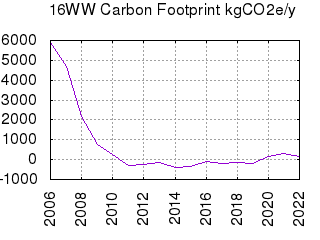 Partial monthly summary of local HDD12 (base temperature of 12°C) data suitable for gnuplot to digest.

See 16WW water mains inlet temperatures for an idea of how much extra "lift" is required by the DHW system in winter, for example.

Also in the context of thermal discomfort.

See a graph of local internal temperature at 16WW collected from an OpenTRV unit tethered to the Web server. 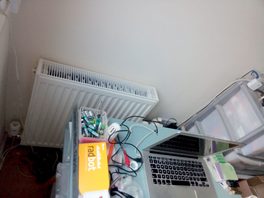 For the 16WW OpenTRV devices see:

See initial data sets for server-local and all sensors, including external, for the end of April 2014.

See the OpenTRV/16WW public data set. Note that data formats have evolved over time, but are all plain text, in various common compressed archive formats for speed of download, etc.

See: A Note On iButton Temperature Logging of Insulation Performance and data set.

I look up the offer at MyJoulo to place a small widget on top of my thermostat for one week to analyse our heating. Our unit arrived 2012-12-17 and ran until Christmas Eve.

See the generated analysis page (local copy) and the raw CSV data. (Also note that this sensor was about 2m away horizontally from button 3 in the iButton mission 5.) 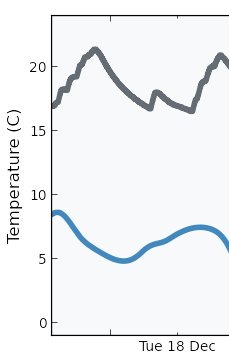 The take-home message from the analysis is that it believes that we have our living room at the average UK 19°C and that our living room temperature varies between about 16°C and 21°C generally in a sawtooth pattern. (Note that 18°C in the morning before school seems to suffice.)

Note that from early evening 2012-12-19 I lowered the radiator flow temperature from about 60°C to about 45°C, independently of this, to see if the i30 PRC/eTRV could work with a lower heating rate. The reduced flow temperature seems to help reduce overshoot both in the target bedroom and in the living room, though the motivation was to try to test at typical heat-pump temperatures.

Note that we don't leave our house thermostat in the living room alone; we keep it lowish unless we feel cold and/or we want to force the heating on for the children's bedrooms before they go up. The latter action would be unnecessary if we had zoning with each bedroom able call for heat independently and those wasteful and soporific peaks >19°C could probably be trimmed. In the interim we should probably make sure that we get the thermostat down to ~18°C as the children go to bed to minimise overshoot.

A friend has generously provided his raw CSV data and chart too (from somewhat east of London), for comparison. In his case there is evidence of much tighter temperature control, at a similar mean level to ours, even with lower external temperatures.

At the end of 2012 I participated in a UCL Energy Institute/LoLo study on responses to thermal discomfort, in return for access to the raw data collected by them on temperature and relative humidity at 16WW, which overlaps with some of my iButton mission 4 data collection.

Three draft plots (based on the sensors at 4 heights in each room):

were made available first, right at the end of the year. (The visible codes are: C04 Bedroom, C05 Living Room, C06 Kitchen.)

See the underlying raw data (note the room codes above on the filenames) in Mac .csv file format (with lines CR terminated, not CRLF or LF), c/o Stephanie Gauthier (then) of UCL whose project this was for, ZIPped.

I did not have much joy attempting to measure "air quality" with the AQE Air Quality Egg. These things are hard to do well and cheap at the same time.

All historic logging data from the k8055, mainly off-grid numbers, is available under data/k8055/YYYY-MM.gz, and a log of system changes is at the end of the historic stats.

Here is Solar John's SOC chart reproduced with permission, along with his note: "it provides only a rough estimate of the actual SOC":

Lead-Acid Battery State of Charge vs Voltage (Richard Perez, Home Power #36, Aug/Sep 1993) notes that "At 32°F (0°C), the effect of temperature becomes pronounced enough to distinctly change not only the battery voltage vs. SOC profile, but also its useful Ampere-hour capacity. The discharge voltage curves may be depressed by as much as 0.5VDC from those shown on the graph. Charge voltages will be elevated by as much as 0.5VDC for a cold 12 Volt lead-acid battery." (This chimes with, for example, Victron's -24mV/°C threshold adjustment from a 20°C baseline.)

A few random facts that are useful for rules of thumb, etc:

Just for giggles, note that there's nothing secret about the makefile used to build this site, though note that for tidiness not all of the supporting scripts are in public view. If anyone really cares I can make some or all of them visible too.

A sparse and ad hoc set of manual temperature and relative humidity measurements, now finished. It was collected before OpenTRV's RH%-measuring TRV1s were in place. The OpenTRV devices gather data automatically every few minutes from most rooms.