Updated 2021-12-04 16:35 GMT.
By Damon Hart-Davis.
Learn how you can best avoid problems with condensation, damp and mould in winter. #mould #condensation #ventilation
See: On Thermo-Electric Generator (TEG) Power From Ground-Source Heat
You've tightened up unwanted ventilation. You've fixed leaky windows and doors. You've dealt with cold draughts to save energy. You may now find that you have more problems with condensation than before. That can lead to mould, and damage to your building. It can also cause health problems for people in the house. Simple actions and some tech can help.
See also: 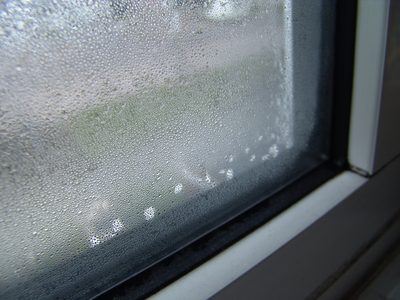 We found that condensation on the bedroom windows in particular was getting bad. We had to wipe down the windows two or three times per week with a towel to remove the water. We also had to wipe away spots of mould.

(We also had problems with condensation between the panes of our old double glazing. Not just on the inside of the inside pane, which was likely due to failed seals. In any case, it is unsightly.)

We had a rucksack go moudly that was jammed beside a wardrobe against an outside wall. It also left a worrying mark on the wall. The bag was rescued with a thorough wash. And we've improved ventilation where it was. But this forced me to consider the whole issue more carefully...

In the very cold weather of the 2009--2010 winter (several degrees below freezing) we have all been sleeping with our windows shut. So to improve general ventilation all round during the day we make sure that the bedroom radiators are off and doors shut and the windows open for somewhere up to around an hour. We force a change of air in the room without cooling the rest of the house too much. 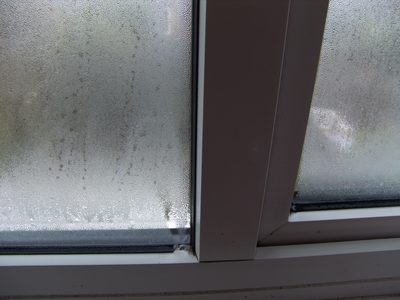 Another important means to avoid condensation is to keep your kitchen door closed when cooking. Maybe keep a window open too. Keep the bathroom door shut while bathing or showering. Then open the bathroom windows afterwards, with the door still shut. This avoids the bulk of the moisture from these "wet rooms" getting into the rest of the house. Instead it is vented to the outside, while not cooling the rest of the house.

We avoid using the tumble dryer if we possibly can. (Maybe once or twice November to February when outdoor drying is impossible.) We bought a washing machine with the fastest spin we could. It leaves little residual dampness in the clothes after the wash. We dry the clothes in the kitchen on a clothes horse. A few stubborn items go on the radiator. We keep the temperature up a bit ("1" rather than frost TRV setting). And the kitchen has direct external ventilation because of the gas cooker. So this does not seem to cause a dampness problem itself. The kitchen window is rarely significantly misted up or worse.

If air-tightness gets very good, for example anywhere near Passivhaus levels, then it will likely be necessary to introduce forced ventilation. MHRV (Mechanical Heat-Recovery Ventilation) may be key, to get excess moisture out of the house without losing too much heat. (Or losing too much 'cool' in a cooling season/climate.)

The aim in the first instance is to reduce or remove visible condensation on windows (and any out of sight elsewhere). It is a small heat pump with a CoP (coefficient of performance) of better than 1 by extracting heat from the moisture that was in the air.

2012-01-13: our MHRV was having trouble preventing condensation on windows upstairs when it was cold (below 5°C) outside. (Possibly because of laundry drying and cooking in the kitchen.) I set the dehumidifier up in the kitchen late morning. Nine hours later the kitchen was warm (~20°C). Humidity was low (~57%RH), even after some more cooking. And the laundry was reasonably dry. The dehumidifier had removed ~1.5l of water from the air. Running ~9h at 180W (as previously measured), ie ~1.7kWh, is a big chunk of our usual ~4kWh/d energy budget. Still probably less than tumble drying. It also provided heat, and removed other kitchen/house humidity.

Removing 1l of water from the air with that device uses ~1kWh. It takes about 6 hours.

Re internal condensation, have you tried simply getting the air moving more locally e.g. a fan, in those rooms far from the MVHR. So not venting the energy filled air air out, but just moving it about.

Getting the RH down would of course be best, by dehumidifying and/or lifestyle changes, but in my old house static air, e.g. in the "furniture shadows" was the real contributor to where condensation appeared.

Be careful that you don't just hide other ventilation problems when using a dehumdifier. If you have a gas fire or gas oven it will put humidity into the air along with combustion products such as CO2. High levels of CO2 which may make you tired or give you a headache. Even without a combustion device you breathe out about 1kg of CO2 each day. You need to let it out and let oxygen in one way or another!

In severe cases with gas fires and ovens, poor ventilation may result in a build up of CO (Carbon Monoxide), not just CO2. Carbon monoxide can be deadly.

Yes, you want to conserve heat. But "make it tight, ventilate right" needs the ventilation part too.

Read emails and queries from, and discussions with, readers of Earth Notes (2010).

Some interesting brief email interchanges (edited as necessary). I hope that you find them useful.