Updated 2020-12-18 14:35 GMT.
By Damon Hart-Davis.
Read all about how it worked for us and lasted longer than expected (with some TLC), but is sadly barely more efficient than the old model.
See: On the i30 i-temp Programmable TRV: Review (2012)
When our dishwasher lost its marbles we bought its direct replacement but found that really only the styling had changed. Oh, and its new electronic smarts meant that I could no longer start it overnight with a smart plug to minimise grid carbon footprint!
See also:

Out With The Old

Our old dishwasher, after at least one repair some years ago (photos of the expired Zanussi DW24), started failing to fill but turning the heating element on anyway 2009-12-10. I assumed that meant that the logic was failing and the machine was about to die. The pump had been getting weaker for some time too, so the money to buy a replacement had been put to one side...

Though less urgent than replacing our washing machine we still wanted a replacement fairly quickly. So having done a quick survey of the alternatives I selected us another Zanussi (AAA-rated). It was more-or-less a direct replacement for our expired model, but with the addition of an 'eco' programme.

The astonishing thing to me is that a decade of dishwasher development doesn't seem to have made an enormous difference to (energy) efficiency. For example, the main and quick washes seem from the manual as if they will use more-or-less the same energy and water as the just-expired appliance.

What we seem to have gained with the new model is a greater variety of programmes which presumably allows more efficient use in its own right for users that take the time to choose the correct cycle. We also get a cooler (50°C) 'eco' wash that washes for longer to use only the energy of the quick wash while apparently managing the thoroughness of the main (65°C) wash and the convenience of a thermal dry.

We also gain a 'delay' button to help reduce electricty costs and carbon emissions, and an even-more-intensive (70°C) pot-and-pans wash...

I shall be evaluating the wash performance vs energy consumption! 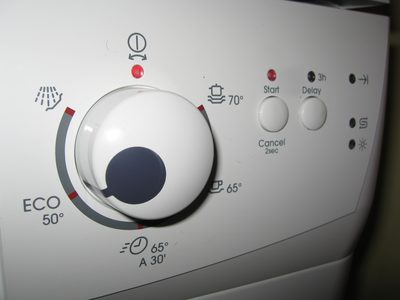 Here are some observations:

I expect that ECO will be our usual overnight cycle, with the occasional Intensive/Normal 'maintenance' wash, and 'Quick' if we need to catch up during the day.

I will use the Prewash during the day when necessary to prevent food from drying on. Also before a Quick wash to ensure that milk is rinsed off first in cold, as an immediate hot wash may cause it to stick worse to dishes. And to empty the filter before a full wash of plates, etc, are especially dirty.

I measured the (electrical) load profile of the dishwasher:

For the "ECO" 50°C wash, with at 13°C water inlet temperature, basic behaviour was:

(Note: the instruction manual seems to claim one more rinse than I observed.)

I haven't kept a full track of all repairs, but here are some:

2016-11-21: further repairs/investigations and and leaks, eg around door seal, means this machine probably won't make the 5-year mark. Another A++ slimline freestanding dishwasher now seems to be available, the Hotpoint SIUF32120 ~£329, and the brand is less worrying than Beko.

2017-03-13: we seem to have a stay of execution: ensuring a hot maintenance wash once per week seems to have kept the machine going, without further mishap, even though we were resigned to replacing it months ago.

We've observed that the machine doesn't seem to be washing well, with fatty deposits left on (eg) knives, and particles of food, and everything staying wet at the end of a cycle. I suspected that it was failing to heat the water. As a test I redid about 30% of the last run with a few new things on a rather extravagant 70°C cycle. This cycle was much more for the benefit of the dishwasher than the things in it...

I saw that not enough power was being drawn (I was expecting 2kW, but saw ~200W for the whole house!), thus I deduced that the heater was broken.

Given the number of brushes with death and repairs so far, the fact that a big patch of rust had appeared at the front, and (minor issue) the cutlery basket is failing in multiple places, I concluded that this was replacement rather than repair territory.

As usual, I worked through a spreadsheet of options!

Given how efficient John Lewis was with our recent washing-machine replacement, my inclination to buy from them, from which the in-stock Bosch SPS2IKW04G, though only A+, seems to tick most of the boxes. It is £399 before any delivery, fitting etc.

Oh dear, I slipped and went for a Candy CDP2L1049W from AO, even given my misgivings about the Candy brand and AO distress-buy chain-yanking on delivery charges. It is alightly more efficient than the Bosch (A++, 0.74kWh for an ECO wash). It is also much cheaper at £219. It should fit given the quoted dimensions of H85 x W45 x D60 (cm). It has a 3/6/9h delayed start — I expect to make use of 3h and 6h. It claims to fit 10 place settings compared to the Bosch (and Zanussi) 9, which may allow me to run it slightly less often and achieve ~10% less energy use for dishwashing than now. With disconnection/fitting/recycling at £55 and free delivery before the end of next week, that seems like a deal. I accept that the appliance may fail sooner and/or harder.

I had in the past been quite annoyed with Zanussi that it didn't seem to care about efficiency given little or no improvement for slimline over our current (and indeed previous) appliance. And the overly restrictive 3h-only delayed start. Now I've been driven to an alternative brand, better on both fronts even though Zanussi hotly denied my accusation (in email). All our major appliances used to be Zanussi (fridge/freezer, washing machine, dishwasher), now only one is. Is this how a brand fades?

Given that shopping for a replacement on-line is miles better than the alternative with a far wider choice of appliances, delivery, etc, I think I can be more relaxed about replacing on the next round! Maybe... 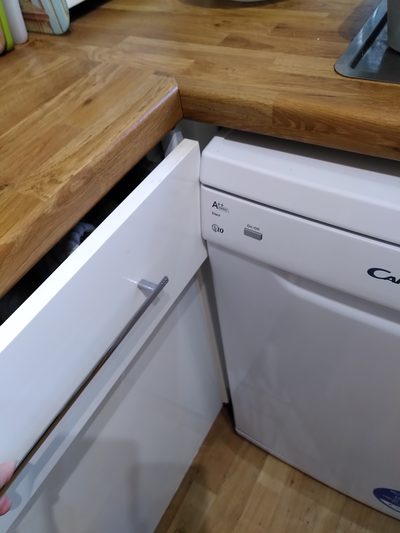 The Candy CDP2L1049W arrived from AO and was fitted ... but is a couple of cm longer than shown on-line (~61.7cm vs 60cm deep shown on AO site, since corrected), so blocks a drawer next to it from opening. Oh dear!

From subsequent events it seems that a more experienced installer might have been able to get the appliance to fit, raising it a little on its feet, as eventually worked with the Electra. 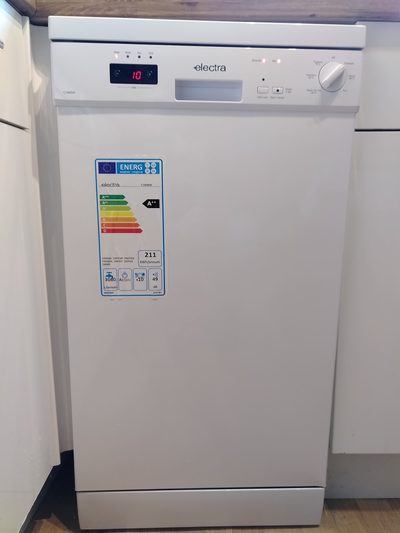 Today AO substituted an Electra C1845W for the Candy, on the fourth visit. (AO needs to allow its drivers more time, training and tools.)

There was no manual available on-line for the Electra, which was a concern. Especially as it meant that AO could not confirm the unit's depth before shipping. (AO's data says 59.8cm and curious the paper manual appears to suggest 57cm in a diagram.)

I'll detail the mis-steps on the way in due course.

The Electra feels a bit more flimsy than the Zanussi, but beats it on many parts of the spec, including energy use. There is also a half-load button, a remaining-time indicator, and possibly best of all, a start delay incrementable in hours to 19h. I expect to make good use of the flexible delay to hit 2am-ish to minimise grid impact.

I don't like AO's delivery charge policy. I am now definitely not a fan of its 'installers'. I'll probably never order from AO again. But their back-end customer services people and support are good.

A final friendly conversation with Phil from AO today has wrapped everything up.

At this point we have had a refund for the small (£10) cost difference between the Candy and the cheaper Electra. We have also had a pair of refunds for their install (and related) costs and enough to cover the callouts I made to an independent tradesperson to resolve issues caused by rushed AO installers. Then finally a discount to reflect the visible damage on the Electra on its second delivery, and possible non-visible problems. Plus Phil was clear that if a failure did occur that was due to the handling, AO would be liable. (Phil did offer me a replacement machine, but that's a terrrible waste of resources and effort, and I don't really wan't to see an AO installer again!)

If you want to do your bit to tackle climate change then you should know that you can get more bang for your buck with things other than solar PV, such as energy conservation and avoiding flying.