Updated 2020-12-20 16:55 GMT.
By Damon Hart-Davis.
Does wind power actually help decarbonise the GB grid in practice? Examination of public data indicates so.
See: On Website Technicals (2020-03)
There was some debate at the time as to whether wind really decarbonises the grid, or makes fossil-fuelled plant such as spinning reserve perform worse. As grids accept more wind it is clearer that CO2 emissions do reduce with increasing wind and other renewables.
Mentioned 2012-09-26 in the Guardian Environment Blog: It's a myth that wind turbines don't reduce carbon emissions.
See also:

Not much more than usual in this case.

I deduce this from the FUELINST figures from bmreports.com. Partly because wind is still small beer, maxing out for now at around 10% of demand.

Wind generation did not hit the near-100% capacity factor predicted (of the the 5GW that is visible to and metered by National Grid), though it did still hit a very respectable near 80% figure, and quite a large chunk of it was outside peak-demand hours when intensity tends to be highest (eg being supported by coal). 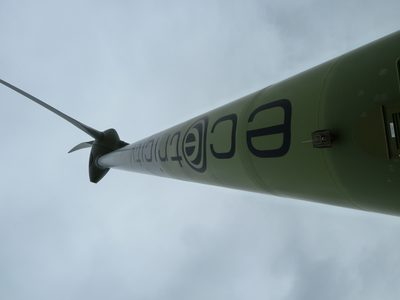 The very peak was 4.01GW at 2012-09-13 21:00 GMT (ie 10pm BST) out of National Grid metered capacity of 5.066GW on the GB grid according to the bmreports.com FUELINST data (Reuters quotes 4.13GW on the morning of the 14th which may have been a spike too short to see in the FUELINST data). Total UK capacity to date according to RenewableUK's UKWED (UK Wind Energy Database) is 7.391GW of which probably 10% is in Northern Ireland, ie not on the GB grid. So another ~1.5GW of capacity that is connected to the distribution networks will not show here but reduce apparent demand instead, like solar PV microgeneration. The NI grid is not run as part of the rest of the UK, ie the GB grid of England/Wales/Scotland.

Mark Lynas prodded me with the following questions:

Not much given that ~2GW of nukes were off-line so day-ahead wholesale prices didn't move much either; they would drop if much other generation were being displaced. Since gas has been expensive and can probably be ramped faster than most coal, it seems that more gas (CCGT) than coal moved off the grid. See also Platts. Note that nuclear at the start of September was a little over 8GW, down to about 6.6GW as wind was peaking 13th/14th.

What actually happened? How long was the wind blowing for etc?

Does the event tell us anything about how far wind can help decarbonise UK electricity?

Not much: every day can be somewhat different, 'baseload' generation such as nuclear can come and go rather than be its idealised steady state, and the addition of new interconnectors (such as INTEW, the East-West Interconnector, going live October 2012) adds more complication to predictions. National Grid doesn't seem worried about accepting a lot more wind into the mix and as is often pointed out deals with bigger daily slews in demand than the slews in wind generation just seen.

The new peak didn't break anything, and wind stood in for supposedly reliable nuclear baseload and had a similar or better capacity factor!

I performed some extra analysis to look for the overall effect of wind on GB grid carbon intensity.

Like many other renewables, wind is not 'demand callable' by the grid to meet demand, ie the wind is not at our command, though wind generation can be curtailed, ie shut off, in rare circumstances such as transmission failure. (2% of available wind generation over winter 2011--2012 for example, see National Grid Winter Consultation Report 2012-13.)

As a nominally zero-carbon generation source, its carbon intensity is lower than anything else metered by National Grid on the grid except hydropower, and there's only a fairly limited amount of such 'non-pumped-storage' hydro. So in general, as wind input to the grid increases, carbon intensity of the grid (gCO2/kWh, ie CO2 emitted per 'unit' generated) should decrease. And because wind is an 'independent' variable that would suggest a negative correlation between wind generation levels and GB grid carbon intensity.

For the days of 12th/13th/14th/15th, ie around the peak, however, correlation ranged from -0.1630 (with everything else positive that day) to -0.5 and upwards. Wind seemed to be having quite an impact on the grid, presumably in part because the volume was significant enough to displace other fuels in decent quantities even if gas seemed to buckle more than coal.

If lots of wind on the grid forced wastage elsewhere, eg with lots of OCGT (less-efficient open-cycle gas turbines) for extra 'balancing' and increasing carbon footprint as wind's detractors assert is necessarily the case, then I'd expect these correlations to be positive and getting more so, under high wind conditions. But this does not seem to be the case from my limited analysis so far, even though I was initially taken aback by the weak positive correlations over significant data sets.

I intend to compute correlation between the fuels and demand, to see how well in particular wind matches demand better than chance. I also intend to compute the correlation between demand and intensity, bucket results as I have for intensity in the yearly analyses, and then find a grown-up statistician to help me do it again, right! I may also ask Elexon very nicely to give me access to more accurate figures than the FUELINST approximations to see how much difference that makes to the results. I may also make an effort to compensate for reduction in apparent demand from wind, solar and other (micro)generation 'embedded' in the distribution low and medium voltage networks.

... gas-fired generation eases back to around 8.7 GW (or 20.4% of the total generation mix) in the face of higher nuclear and wind generation as well as increased continental imports.

Nuclear generation has lifted from just above 7 GW at the end of the previous week to over 7.6 GW midday Monday with the return of EDF Energy's 610 MW Heysham 1-2 nuclear power unit on Sunday. ...

Coal-fired power continues to maintain its dominant position within the UK power generation mix at around 18 GW, or 42.3% ...

The researcher Damon Hart-Davis, who maintains a real-time website showing the grid's carbon intensity called Earth Notes, confirms separately that when the wind is blowing the UK emits less CO2 per unit of electricity generated. This is much more visible currently than it has been in previous years because wind is now a significant enough player to stand out from the statistical noise, which include electricity produced by Welsh pumped-storage hydroelectricity and imports and exports from France, Holland and Ireland.

Correlation of demand against grid intensity: 0.8660.

Correlation of demand against grid intensity: 0.8532.

Correlation of demand against grid intensity: 0.7809.

Intensity correlates positively (and strongly) with demand, as expected.

Wind is weakly positively correlated with demand, ie it turns up when wanted a little better than chance, though some of that may be curtailment during strong winds and weak demand.

Coal has the strongest correlation with demand, followed by CCGT and hydro.

How a few people (associated with Transition Town Kingston) tried to put together a community-owned renewable energy system circa 2012, initially based on solar PV. Spoiler: KCE was dissolved at the end of 2016.