2014/05/26: I have been considering supplementing the PV input to my (~4W) off-grid powered SheevaPlug server with direct thermal generation in winter when PV is at its least good; I already have a little bit of wind (my MotorWind array) for this, but thermo-electric generation (TEG) might have an even better anti-correlation vs PV and also have the advantage of being silent and having no moving parts.

After a bit of Internet searching I found and prodded two (German) companies, Thermalforce.de (see their "m902 Geothermal probe") and Quick-ohm.de (see their QC-127-1.4-6.0 device) who have very politely humoured me thus far.

A bit of rumination and back-of-an-envelope calculation from these assumptions:

suggests that a device with a 1--2m heat-pipe might be able to extract <0.7W or (say) ~0.5W of electrical energy mid-winter, radiating and/or convecting away ≥70W to the air (note: the QC-127-1.4-6.0 'cold side' is 40mmx40mm ignoring likely necessary heat-sink), and ignoring details of converting to and transmitting in a form usable by the server.

Note (fact alert): the Met Office says that (quoted 2014-05-26) "Mean annual temperatures vary from about 11°C in central London and along the south coast to about 9°C over higher ground well inland" which should be close to my year-round ground temperature at reasonable depth, and "January is the coldest month, with mean daily minimum temperatures varying from over 3°C in London and along the coast to about 0.5°C over the higher ground" which means that I probably have somewhat less differential to play with than in my initial assumptions above. The horrors of a mild maritime climate!

Thermalforce.de is suggesting a unit made up of the following:

which looks like I might hope to get ~100mW continuous output in the depths of winter (I'd need 40 to power my SheevaPlug)! By comparison, PV is lucky to get 1 sun-hour per day equivalent at that time, so a capacity factor of perhaps 4% or less, so 100mW of thermal-electric generation (TEG) is maybe worth ~2.4W of PV, and possibly a little more since a battery might not be required with TEG, the ground's thermal mass itself being storage.

Note that according to weather data (for nearby EGLL/Heathrow) c/o degreedays.net, over the last 36M (1121d) the number of days below a baseline of 5°C, ie at which the above device might hope to generate something of use, is 287 or about 95 days per year, and provides good (not complete) coverage over the Nov/Dec/Jan winter PV low. 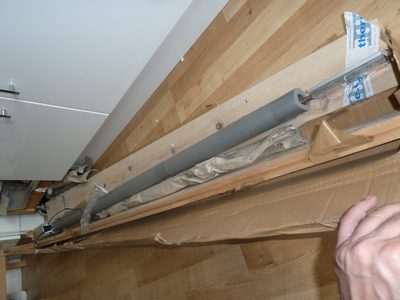 See images including of the tiny in-line DC-to-DC boost converter.

2014/06/29: I finally gave the unit a test today, with the bottom end under the running kitchen hot tap (~50°C) and the LED that Thermalforce.de attached lit up after a short delay: a mere 20kWh+ of hot water input for maybe 100mW of light!

(The unit had arrived on about the 19th, well packaged between substantial wood planks.)

The output at the (white) LED was at about 2.5V, presumably clamped by the LED; the input upstream of the in-line barrel-shaped converter was ~0.45V.

This may well get put into the loft until closer to winter when I may need some help to install it as it requires quite a deep narrow hole.

As a side-note, it looks like I may be replacing the SheevaPlug with a 'tuned' Raspberry Pi (Model B) which should run (or idle!) happily on well under 2W, including the battery-sensing and external control I/O, which means that I might only need 20 of these units to power it mid-winter!

The TEG was installed this morning as I expect an air temperature below 0°C overnight which may be just low enough to allow the TEG to function.

2015/01/16: the TEG was installed physically this morning, and this evening I connected up the DC-converter and LED (in a transparent freezer bag to keep water out while keeping the LED visible) and with an air temperature of ~5°C the LED did not light (as expected).

London is not cold enough in winter for this to work, as the suppliers warned me would be the case!

How I set up a Raspberry Pi (Model B then B+) after the SheevaPlug. ~1.6W consumption typical, 400x less than my original server rack! #RPi #frugal #offGrid

The Raspbery Pi B/B+ took over from my SheevaPlug and was my main Internet server for a couple of years, until I broke it. A good piece of kit with excellent community support!