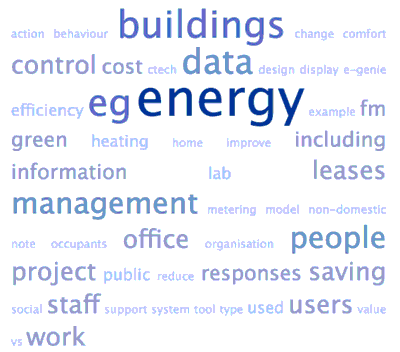 Some general interesting observations from the research, for example:

The work has a focus on office workplaces...

Increasinging energy use is taken from the hands of the end user and put into the hands of a Facilities Manager (FM). FM's job is "keeping things running" including BMS wrangling, and dealing with uncooperative staff. Lots of reactionary fire-fighting.

In spite of clever BMSes, FMs develop 'informal' views from 'walking around' rather than using the detailed BMS-gathered data.

Energy use is seen as utility, cost, and a 'right' by different groups.

A more specific Energy Manager role may be looking at detailed data, eg from hundreds of smart meters, looking for savings, etc. But may be stripped of context of the energy use. (The EM may not have control, eg for spending, unlike the FM.)

Trying to cut out staff is unhelpful as they will find creative work-arounds. No agency for staff means that the users and controllers of the buildings have continuing conflict of interests.

Staff are also interested in their own microclimate not FM's view. (I once had a desk at a big corp that was 30°C below because of big computers, 18°C above because right under a vent!)

Energy costs low as fraction of overall costs so not high priority for senior management. (~1% for school I am resources committee chair of, for example.) So staff may have to go over FM head to senior management to drive better working conditions.

How to encourage employees to reduce energy use in the workplace?

Why would employees do this as they get no direct benefit? Altruism?

People do get self benefits from volunteering, eg giving blood.

There are many possible factors from improving the employer's image, environmental concerns, to a nice warm glow inside...

The strongest motivator was saving the employer money...

The strongest predictor was environmental concern. (There was a negative correlation with wanting to improve reputation at work, though that can be fixed with the right corporate ethos.)

With energy displays, what type of display drove behaviour (money, CO2, or both)? And what type of numbers (normalised or real-world but therefore numerically different.)

Lower numbers caused reduced impact (eg £ rather than kgCO2), but having normalised the numbers to (say) equivalent 'units' then cost/money displays were more effective/motivational than CO2.

In the second research line, how to deal with free-riders on shared resources?

The are negative responses to free-riders, and want them 'punished' by (say) an employer rule or energy champion.

What if the free-rider has a genuine need, eg health reasons? In this case, less negative, and people will work harder to compensate for the person who cannot reduce consumption.

So be clear about illegitimate vs legitimate excess use of communal resources.

Technical interventions to fix eg, system setup errors, such as running systems when no one was using them, and no one notices even though energy is wasted.

Group story telling (bringing people together in 'safe' space) helped expose some of these issues.

People worry that energy efficiency is by sacrificing comfort.

Instead it is possible to avoid consuming energy by mistake, eg heating on Min-Sat but building only used Mon-Fri; no comfort penalty for having heating off on Saturday!

Make it clearer to users what the system is doing, eg visually, to make these errors easier to spot, eg with simple semi-public display on a calendar in the kitchenette where people may loiter anyway.

Library staff liked it to talk about like the weather, and the display motivated them to try to tweak controls.

"Take action" screens including discussion spaces and a pledge tool (with planning support).

The initial deployment didn't have a clear use case, and users were not sure what do do with the system.

Some fixes including removal of need to log in, and to message the FM.

Next deployment had higher engagement, with more emphasis on social/group behaviours, rather than individual.

Workshop templates and presentations: capturing maps of use on office plans, showing effects of practices on energy use, developing efficient new strategies.

Games: idlewars! (Leaving your screen on unattended too long flashes up QR-code that a 'zapper' can scan and get kudos for, but no punishment for the screen's owner.) Make sure that you can only win with the best environmental strategy.

Audit tool including informal ways in which equipment is used, and fun thermal imaging tool use.

Future: use the toolkit to help with demand side response (DSR) amongst staff, even to explain why the heating/aircon is currently off for hard DSR response.

Ctech has been a five year project.

Aspects found to be important:

Don't take agency and responsibility away from the end users.

Since the impact of individual responses in the workplace is limited; so it is important to support especially team-wide collective/social responses.

Electricity use tends to exceed the benchmarks in office and education, in buildings intended to be low energy.

What do occupants do that undermines the energy efficiency of the building?

Qualitative studies of perceptions and actions in each season of end users.

Occupants were willing to adapt for comfort; not thinking about energy.

Some building control features were blocked by poor design (windows too high), or by 'wrong' use of spaces preventing other rooms' use of controls.

Supported users adapting eg by moving to an area with a temperature comfortable for them.

How to tailor interventions to knowledge of the occupiers? For example, designing to work even in the face of 'wrong' folk physics.

Design teams should provide projections of performance and running costs ... as a range.

How best to parameterise occupant-related internal loads for prediction of energy demand, including demand peaks, and how to calibrate, and calculate uncertainty bounds.

Does indeed visibly cluster by building zone and thus function.

This model can be used as a design tool, demand-side management tool, even fault detection.

Unlike for many of the other cases of owner occupation, this is more about tenanted retail and offices.

About 50% of retail and office space is rented.

Looking at UK, Sweden and Australia.

Leases vs leasing: lease is a piece of paper, leasing is cooperate stuff around that as tenant and and landlord.

See: "The Tenants and Landlords Guide to Happiness"

Green leases can avoid split incentive problems for energy efficiency for example, and also return the building in a good state.

Grean leases have additional clauses in the lease, eg green improvement clauses. They require tenant and landlord to work together in energy management, data sharing and maintain energy ratings.

Green leases tend only to be used for big prime buildings.

Nothing will happen if neither side wants the green leases.

No one has been taken to court yet over green lease clauses.

Next: private (internation standardisation would help) vs public (can be a public policy tool).

3DStock is 3D spatial model, measure and model energy use, at fine grain.

Sometimes there are fewer meters than users: how is energy shared?

How to classify buildings with multiple users, eg several offices and shops? How does the mix vary by location, eg Camden vs City of London? Is there double counting and when is a building officially non-domestic?

Mixed activity buildings are a significant and difficult part of the stock, especially in dense urban areas.

How to generate long-term value from the various TEDDINET bespoke data sets?

Maybe the best use of a project's data will be by someone else, but how will they discover it and understand it?

Just dumping it raw somewhere in a hurry at the end isn't ideal!

Losing it, or forgetting it, isn't good either.

You may also need to develop shim ontologies to allow operations over multiple data sets.

File your metadata with your data!

Licences for data sets are also difficult, and for derived data sets.

Vast majority of interviewees paid less attention to energy saving at work than at home, even though positive about energy saving in general.

Seemed to underestimate costs of different types of energy. So spent more effort on say lighting efficiency even though a much smaller cost (and carbon footprint) than (eg) heating.

This misunderstanding reduces effectiveness of extant attempts to economise.

People feel unable and unmotivated due to lack of personal control too.

"If BAT/BEMS were properly designed ... operated, average savings .. would be 27% higher." (IE we're not doing it right at the moment.)

Savings from upgrading controls and envelope each in the ~20--40% range.

BEMS systems built on strings of IF ... THEN don't scale. But model predictive control does better, especially when there is a significant time lag from inputs to outputs. (Aka receding horizon control.)

Currently MPC needs hordes of PhD engineers to run it, who cost too much.

Nice ways to do it: zoned temperature control with allowed deadband. IE allowing some wobble around target setpoint.

It is also necessary to allow for buildings changing over time, from internal or external reasons.

So maybe insert auto-generated IF ... THEN rules into existing BMS?

Benefits of doing so:

How should people be involved?

A partnership with users, with strategic support from the organisation, works.

Energy Saving in the Lab Through Social Norms, and without Incentives

Lots of energy is used in labs, partly from not properly pulling down fume cupboard sashes.

Why? Inconvenient? Bad examples set upon starting? Lack of concern?

People feel that their autonomy is being compromised when being told what to do. Then bad habits are hard to break.

Social norms to the rescue!

Included self monitoring since it increased effectiveness of social norms.

Did save significant energy: £500 per fume cupboard per year.

New, good, habits now seem to be in place.

Project in progress with city council and University of Edinburgh.

First understand how energy is currently being used.

Looking at institutional structures and well as individuals.

Talking to people at all levels in the organisation.

Collected perceptions about who has control and what interventions could achieve.

Process is starting to emerge. Tackling what people are currently doing in the buildings, not energy reduction (yet).

What is the claimed value of doing new metering for businesses and large organisations?

Looking at marketing for AMT (automated metering) companies. How do they sell their services?

But what value is really available from more data? What capacity is there to act on that data?

Interesting parallels with late 19th century, when metering was moving from lab to commercial deployment.

People were debating back then if they should be paying for electricity, or the lighting service that they were using it for. We were recounted a complaint at the end of the 19th century, before electricity metering was widespread, that some electricity suppliers were charging by the number of electric light bulbs used rather than the electricity itself. LaaS (Lighting as as Service) is still a live commercial activity.

Spotting open windows (leaking heat and wasting energy) automatically. Then, for example, emailing staff in various ways to try to 'fix' this.

Note that staff often don't see 'heating' as energy (that can be wasted). Unlike (say) photocopiers and other electrical equipment.

Read the paper on Camera-based window-opening estimation in a naturally ventilated office.

The results of the email interventions will be published later this year.

Summary of current state of play of existing shared-savings and ESCo strategies most relevant to our prime focus on private rental households.