... a pre 1910, Victorian-style terrace – has been reconstructed in an environmentally controllable chamber, in which levels of heat, light humidity and rain can be simulated and recreated time and time again.

The Energy House also exists to explore a subject dear to my heart:

We are also investigating ways to support carbon reduction by encouraging the public to change the way they use energy.

What technology and solutions should people adopt and install? How do you convince them to change behaviour? These are just two of the questions that the cross disciplinary teams from the University of Salford are working on.

For my visit the space containing the house was at a brisk 5°C; the mean UK winter solstice temperature. (London is more like 2°C at that time, I think.) It did indeed feel like a Christmassy chill. The available range is about -12°C to 30°C. I wonder if that top range is high enough to model coming heatwaves...

Dr Richard Fitton conducted the guided tour and gave up a lot of his afternoon too to discuss issues around this house from SAP to curtains and back again via multiple interesting topics! Many thanks. 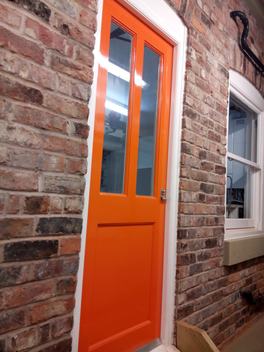 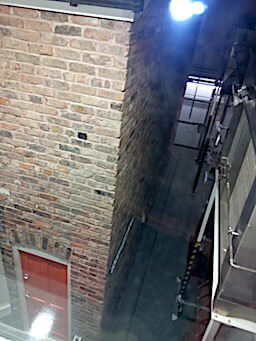 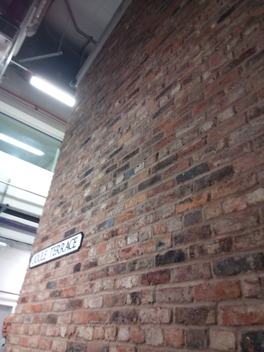 The chamber can also produce sun (as heat/IR), wind, snow, and rain — there's 2 tonnes of 'rain' water stored away to mist/dribble on walls etc as needed. Possibly even fake dews as required...

Inside the Energy House (and a half; there's most of a second 'semi' in the house) are fairly conventional looking rooms. Other than test equipment and lots of trailing wires, temperature (and humidity) measuring points at three heights (ankle, eye, ceiling very roughly), automatic hot water taps and doors to emulate occupancy, and lots of extra meters and sub meters for electricity, gas and heat. I tested the bed, for science; it was acceptably comfy.

The half house has a plant (and rain water tank) room in place of a kitchen downstairs.

A couple of interesting details: the Energy House combi boiler's gas flue is piped to the real outside world so as not to dump combustion products in the enclosed chamber. Also there is PV on the roof of the chamber pointed at the same angle as if on the Energy House's own roof. 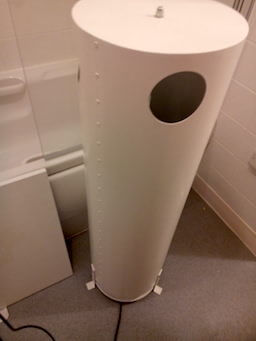 When I model the heat contribution to a room from a human in it, I tend to use 100W (about the same as a candle, as it happens), to keep the arithmetic simple. In Salford they prefer 70W, for a resting adult human in front of the TV or similar, and that is almost certainly a better figure. (A minority of the time an active occupant, such as a small child racing around, or an adult on an exercise bike, etc, may use more like my 100W.)

The actual manifestation of this replacement human is a white metal tube with holes for ventilation at very roughly mouth height, and that can be easily moved around the room to simulate the location of the humans. Inside, its beating heart is in fact some old-fashioned incandescent bulbs on dimmers to get the right heat output.

I can imagine a scenario testing Radbot in the Energy House, where Radbot's metal stand-in "humans" have a lower IQ than it! No disrespect to real humans who do have better things to do with their time than fiddling with the heat...

Incidentally, the actual "official" space heating was from radiators, ie hydronic/wet heating, driven from a modern condensing gas combi boiler. Each rad had a smart TRV on it (obviously the 'wrong' one!), and temperature sensors and a heat meter. Fully tricked out for data gathering and energy-consumption monitoring in other words. 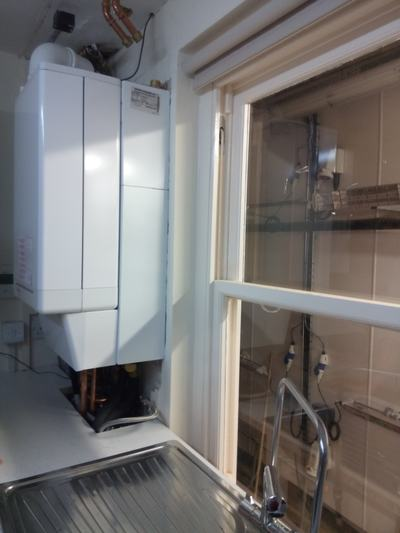 One interesting case was where a test was going on upstairs on how to best deal with the horrible but common case of a rad against an outside wall underneath a leaky, single-glazed sash window. In that case, for maximum control as I understand it, the heat source is actually electric, but piped into a conventional rad to mimic how it pushes heat out into the room (and indeed the exterior wall).

What Is "The" Temperature of a Room

An interesting side question that came up, an old chestnut, is what is a room's temperature? (Given that measured air temperature can be as much as 7°C different from bottom to top in a typical UK home.) And that neglects humidity, drafts, and radiative effects. The old "two experts, three opinions" effect is real!

I think of "the" temperature as being at eye height when seated (if that would cover most of the time in the room). Interestingly this seems to be where Part M of the English reasons dictates that a wall thermostat should be placed these days.

Those of us with rads rather than underfloor heating will be well aware that eye-height may be peachy, but feet can still be frozen. Well-placed radiators unobstructed by curtains and furniture should be able to stir up strong enough convection currents to remove such uncomfortable stratification. But it remains a real phenomenon from time to time.

And pertinent to the all-in-one Radbot, measuring temperature close to the radiator, and typically in UK homes near the floor... What temperature does it see compared to a human on a sofa elsewhere in the room? One reason that Radbot, like many other TRVs, has numbers but not temperatures on its control. The exact temperature at your ankles may not be that relevant to your comfort on any given hour. 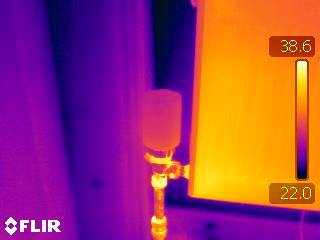 At the start of 2019 we went back to the Energy House to test Radbot! The results were good.