Earth Notes: On Setting Up a Raspberry Pi 2 as Off-grid Server

Updated 2020-06-17 23:35 GMT.
By Damon Hart-Davis.
Read how I set up my solar-powered RPi2 (previously a Model B then a B+) to take on load from servers elsewhere on the Internet... #RPi #frugal #offgrid
See: On IoT Security and Privacy, for Data in Transit and Long-term
The Raspberry Pi that has been running all my primary Internet servers from my home/office since mid-2014 (including this HTTP server), is entirely off-grid-powered by solar PV. It's great to be using actively-supported hardware and Linux distro. (Before that, partly or fully off-grid were a SheevaPlug and a laptop, with the feeling that I had to hand-craft lots of stuff...) This is how I set it up.
See also:

The server uses less than 2W, even though I do some slightly inefficient things at the moment that prevent the CPU sleeping, and I have some loads such as the Sunny Beam on USB that I could trim. (Typical load including all these extras is reported overnight as under 1W, by the solar controller, as of 2016Q3 for example.)

My dirty secret is that I still have servers elsewhere on the Internet carrying some of the load from a busy site or two, plus DNS etc, including CDN services.

(I also have DNS secondary servers which are usefully not near my primary, but they don't need a lot of oomph or carbon footprint.)

Early 2015 I turned off a power-hungry server, a London-based 24-thread Sun Niagara "CoolThreads" box, and threw all the load over to its US-hosted sibling (x64 based though).

(I also maintained a small Australian virtual server for experimental reasons, for testing some of my distributed algorithms/code.)

Having upgraded my home/office Internet connection from ADSL (~1Mbps up) to FTTC (~10Mbps up or better), there is a prospect of bringing more load home, and killing off more carbon-emitting server power elsewhere in the world, but only if I can beef up my off-grid processing power at home since although the RPi can handle the primary services they are lightweight or can get away with being a little slow.

With the maybe 6x speed boost of the RPi2 over my existing RPi, my parallelism-friendly systems might just hack it.

As of mid-October 2015 I still had to find a >128GB micro SD card for it if I am to test some of my theories, but hopefully I can do that soon! 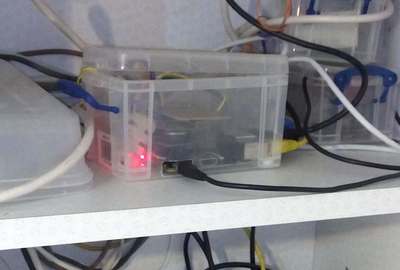 2016-05-22: in the process of rearranging my off-grid system I seem to have bust the RPi B+ (it will no longer power up) so I am trying its SD card in the RPi2 B that I have to hand, and miraculously it just works!.

I have changed the overclocking settings to the Pi2 preset: Pi2 1000MHz ARM, 500MHz core, 500MHz SDRAM, 2 overvolt, though I note suggestions that this overclock may not be stable.

The system seems somewhat faster, though not hugely so. It may be helpful to allow a little more memory to key applications now that 1GB is available.

I'm seeing Java 8 crash in server mode, so I'm wondering if this is stability problem, though I am tweaking other parameters such as stack size to check.

This suggests that the 'Pi2' overclock RAM setting may be slightly too fast while "Certain divisor relationships between CPU clock and core (L2 cache) clock (such as 2:1) seem to enhance stability and performance," resulting in suggested settings of:

My preference would be to go back to the default 450MHz RAM speed, and the absolute minimum GPU memory.

I got nervous on seeing more odd behaviour and possible filesystem corruption and commented out all but the minimum CPU frequency parameter, leaving the relevant part looking like this:

which gets me back to the equivalent of arm_freq=900 and sdram_freq=450 as checked with sudo vcgencmd get_config int. The 'core_freq' may be back to a very conservative value (250?).

I am more of the opinion that the Java 8 (server) version that was installed was unstable:

so instead I have fetched the latest from the Oracle Web site:

Note that neither support -XX:+TieredCompilation for the RPi2.

To try to keep the OOM killer at bay, and to try to be able to be less twitchy about default stack sizes, etc, I have enabled a small amount of ZRAM space (~128MB) in /etc/rc.local:

2017-08-17: following the suggestions in "Controlling PWR and ACT LEDs on the Raspberry Pi" I've switched the bright red power LED to come on only when a CPU is busy, so I hope consequently much less when the system is conserving power, with the following in my rc.local:

I'm using cpu3 rather than cpu0 in the expectation that CPU 0 may get woken for everything including interrupts, and other cores may get woken only for real user-land activity, and so the LED can spend more time off.

I have now lost my visual reminder (the red LED going off when power is low) that I need to fix the power supply generally...

2017-10-09: I am always looking for unnecessary processes and subsystem that I can cull, and having noticed excess getty lines in top, I came across "Disable some useless stuff in Raspbian". I particularly like disabling stuff that also reduces attack surface.

In /etc/inittab I commented out the last three getty entries (they could possibly all go), followed by sudo telinit Q:

2017-10-13: I saw a lot of console-kit-daemon threads when running htop with the 'H' toggle to see all user threads within processes. So I followed the suggestion in Can consolekit sefely be removed, when running headless (no GUI)? and ran:

If I do need to plug in a console/terminal to recover the system, I don't need X11, just a plain tty.

2018-11-24: I've backported the following /etc/sysctl.conf setting from my in-progress RPi3 set-up, in case it helps avoid client bufferbloat even without the BBR congestion control also being applied on the RPi3:

Note that I first applied it on the fly with:

Learn how we boldly conquered with Spacetherm aerogel the final IWI challenge of our blank end-of-terrace north-facing wall! #aerogel #IWI

At the end of 2015 I finally tackled the remaining significant area of the house that had not yet had IWI (aerogel Internal Wall Insulation) applied: the two bedrooms (upstairs) on the blank north wall of the house.