Updated 2022-01-06 17:41 GMT.
By Damon Hart-Davis.
Would you rather live next to a wind or solar farm, or a coal or nuclear power plant?
See: On Going Green in Newcastle-Upon-Tyne, UK
What are the best of our renewable sources, and where, and does storage change that?

My reply to a friend's email of August 2007 about solar vs wind ran thus:

...but I know the issues were the storage ... Given the choice I would rather live next to a wind farm than a fossil or nuclear power plant - but in essence there are issues with them - and whilst I used to admire them when I drove past them in Cornwall, they definitely have quite an impact on the landscape. Solar energy seems by far the best way forward - as it is a continuous source of energy that is very un-utilised.

One problem with solar in northern climes is that its peak availability does not coincide with peak demand, eg in the evening and in the winter. This makes the storage problem more acute. In (say) Spain or Texas or California when the PV output can be used in part to run airconditioning and thus shave peak load on the spot, storage is not quite such a burning obvious issue.

Wind in Winter, Solar in Summer 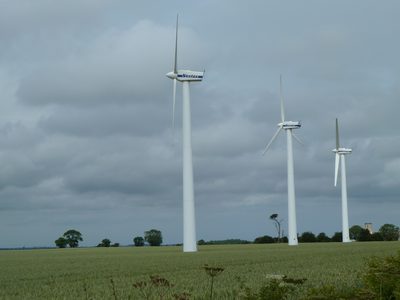 Wind power in the UK for example has the virtue of peaking in the winter months when solar PV is poor (maybe less than one quarter of the available power each day compared to mid-summer) so any RE portfolio should consider a mix.

In principle the efficient thing to do in (say) dense urban London, at least while the amount of solar on the grid is low as at 2007, is to use solar with a grid tie and use the Grid as 'storage' (it can burn less gas for example) when you are generating excess power. But the minimum worthwhile grid-tied system is bigger than I need, expensive to install, and I don't have an unobstructed south-facing roof. Wind power is not very effective in built-up areas for various reasons, and I'd only be doing it as a test and top-up.

Solar On All New Build

I think that the UK building codes should quite possibly insist on all new build and refurb. (And except in special cases having grid-tie PV with the power companies forced to buy the power at at least net rates or higher.) Germany has been doing part of that and now has a significant chunk of solar on their grid as a consequence. They may not have managed it well, and are now pulling back a bit, but it terms of energy security (can you say 'Putin'?) and grid stability I'm sure that it's a good thing!

I now think that net retail rates are too high and don't reflect actual value and cost in the system; paying more like time-of-day wholesale rates, plus a small premium, would encourage people to let their 'excess' PV spill to grid when the grid needs it most. Maybe also position solar arrays to the west of south to provide more support for the evening peak for example.

I believe that Denmark now has >20% of its grid power from wind, so it can be done too!

Anyhow, I think wind turbines are as pretty as Dutch windmills and other elegant engineering works, so I suspect that the impact is more shock than lasting harm.

Learn how I started to go off-grid @Home, and warming up to getting real (spendy). #solar #microgen

Trying to get more done with my off-grid PV pilot, and working up to grid-tie too.