Updated 2021-06-19 11:31 GMT.
By Damon Hart-Davis.
Social norming vs gamification: notes from the Project CHARM conference at the British Academy. #norming #gamification
See: On The Green Light Signal and Beyond
See also:

Consumption not just purchase. It is ineradicable, beneficial, environmentally harmful.

Assuming tech won't solve the problem. So do we consume less or differently?

Behavioural economics relies on steering and conditioning, not rational actors.

*** CHARM is about the making and changing of norms. (Ie, collective behaviour rather than individual actors.) ... social engineering

CHARM is trying to find our which interventions work and on what scale.
Support Earth Notes with Patreon and Ko-fi! 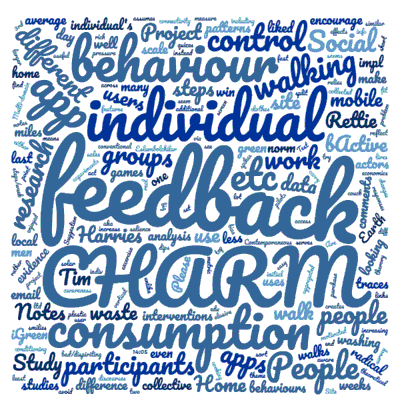 Hourly usage graph was salient even if vertical scale (kWh) was opaque.

3% (not significant) reduction w/ feedback: would need larger sample. No difference between individual and social norms.

People we more interested in emails than Web site.

Discourse: often money is conventional; an important one is waste.

CHARM feedback made people more aware of waste and consumption.

Q: even people claiming that they were different to the norm (eg we're a big family), took notice of norms at least some of the time.

(Feedback about specifics such as number of laundry loads per week for individual vs norm is probably more actionable.)

Suggestion to provide comparators against groups not too different from individual's current position to avoid being overwhelmed. (Rettie suggests that not suggested by survey responses.)

Fun, easy to use, light-hearted to fit FB environment.

FB has some green games, but few green apps.

Good for samples of elusive groups such as young men.

Give users same quiz 7 times over several weeks to see how answers changed.

Typical Q: How many of your clothes did you re-wear before washing?

No evidence that either sort of feedback helped.

Did the games and asking the Qs change behaviour?

Not all users were driven to download it because of the theme. Prizes may broaden the appeal.

Most people have smartphones, which are loaded with sensors (accelerometers, GPS, etc, etc) and data connectivity and easy/convenient user access. bActive makes use of these features.

Did the smartphone app encourage participants to walk more?

The app was always on (to measure *all* walking), unlike some similar apps.

Project required (the all male cohort) to carry their phone in a pocket.

Same 3-way split for control / feedback as other two.

Social norms as before showed participant compared to average and to top 20%.

Type of feedback did not seem to make a difference.

Walking is just a means to an end: no awareness. "Walking is not excercise!" Measuring walking was interesting to participants.

Calories bad/dispiriting metric because a lot of steps to burn many!

Once working is a goal, then the incidental walking gets appreciated.

Also participants try to make up for 'bad days' looking at the "peaks and troughs" and "dips and spikes".

Users enjoyed liked looking at the graphs aka "digital traces" of their lives.

Motivation seems to be avoiding being a lazy "couch potato".

Participants v competitive and talked about "winning" and "beating the average" and liked smilies.

On days they thought that they could win they did extra steps, walked less when they didn't think they could win. People well below (norms) were dispirited and didn't want to look at the screen.

Social feedback creates competition but no evidence of additional walking.

Graphs were key (cross-gender across CHARM).

Ave 2011 UK commute to work 9 miles. Max typical walk the work that is feasible is 1 mile. Almost no one walks to work at/above 2 miles.

Multi-domain research has some real advantages/insights.

People fascinated by their digital traces, and reflect on them.

Both individual and social feedback are useful.

There isn't a therory that combines indiv and norms.

"Nudges" are there, but maybe theory weak.

OpenTRV sets out to make it easy to save lots of energy and carbon by only heating rooms that you're using, and by no longer trying to use a single thermostat to get your whole house comfortable. Radbot is a commercial OpenTRV-based product.