Updated 2020-01-05 21:32 GMT.
By Damon Hart-Davis.
Lots of good LEDs, but also too many snake oil products with big stands and toe-curling pseudo-science.
See: On the Better Futures launch at London City Hall (2017)
Today (2011-10-11) I briefly visited the Energy Solutions Expo at London's Olympia at the very end of the show day.
See also:

There was what I took to be an alarming number of snake-oil salesmen present, with big stands and scandalous pseudo-science marketing claims, but there was separately lots of good stuff too, thankfully.

One theme that caught my eye was lots of LED lighting vendors, many claiming lamp efficiencies of over 100lm/W, though some of those qualified with claims of "effective lumens" or "absolute photometry" rather than the "relative" stuff that HID lights quote! It's clear, marketing maths notwithstanding, that LED efficiencies are passing those of many other lamp types for domestic and commercial uses, and size/power is no longer much of an issue for most deployments.

Brightlife and istoriaLED both claimed >100lm/W with a little wobble on the definition that I have to think about, but I did like the products that both were showing, particularly the Brightlife Quad2 ceiling lighting panels (CREE LEDs within) and the MR16 16V LED lights from IstoriaLED. 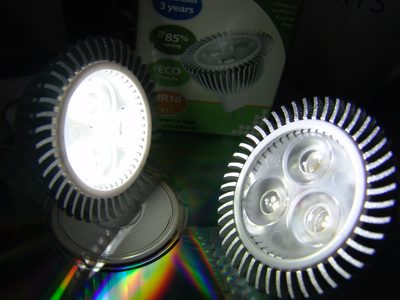 (2018-03-15: some of the Istoria sample LEDs, 12V and 240V mains, are still going strong, which shows a longevity and reliability that I like to see! One of the 12V LEDs has participated twice in school lessons on renewables too.)

Dialight big HID replacements (the SafeSite and DuroSite High Bay) at 150W (93lm/W) claiming to be replacements for 250--400W HIDs, and theirs were not the only massive LED lamps in the thousands of lumen range, eg the recessed modular LED light panel (ecoLED) shown by Topline Components. Considering the weak glow of the first red LEDs I got my hands on as an electronics hobbyist many many years ago, these were amazing to behold.

However, sometimes you just need to keep light and heat out, and the SolarGard window films caught my eye. Apparently even their premium £60/m^2 film can in the appropriate places pay itself back within 6 years (and typical film is half that cost). But critical to project succcess is modelling and measuring to find where it would be cost-effective.

(On the subject of keeping excess heat and light out, see Sage Electrochromic Glass Is A Thermostat For The Sun from TreeHugger!)

I also got to see a few of the mythical "smart meters" of various flavours; I was told that a typical commercial single-phase unit might cost £100 in quantity.

(2017-07-22: I still haven't actually managed to get my hands on a real smart meter, eg SMETS2, to work with and/or at home, even though I now have a project nominally dependent on access to one! All waiting for the DCC to be ready and functional at scale...)

Monitoring temperature in and around a newly-aerogel-drylined bedroom using iButton sensors. #temperature #dataset

By measuring the thermal performance of a room over an extended period, and especially through the heating season, I got an idea of any further work that could be done in that room. And indeed elsewhere in the house (for example in reducing unwanted air infiltration) to further improve performance.