Updated 2022-05-16 15:20 GMT.
By Damon Hart-Davis.
10%+ of European peak generation capacity should be interconnected with the US. Smooth demand, share PV, and catch the Atlantic weather fronts! #INTUS
See: On the Best Time to Fix Your Home Heating: Summer!
As of 2015 the EU was driving members to cover ~10% of peak electricity demand with interconnection capacity. The motivation is to help reduce fuel and reserve costs and improve reliability. Also to provide better geographic diversity of intermittent renewables such as wind and sun. This supergrid should extend beyond the EU itself and wider Europe, to the south, the east, and over the Atlantic to the west.
See also:

The EU is small enough geographically that on the east-west axis it does not much (for solar PV) spread out sunrise/sunset and time-driven demand peaks. Nor does it always escape from under one weather system for wind. This increases demand for storage and demand-callable thermal plant, eg biomass or Energy from Waste (EfW), or in the short-term natural gas.

One avenue for improvement is to link eastwards to Russia's 8-timezone E-W span IPS/UPS. Especially if it were to also string lots of PV and wind along a much-reinforced grid. Politically and technically that doesn't seem likely right now. Interconnecting IPS/UPS and ENTSO-E would span 13 timezones.

Running south, closer to or even across the equator to reduce seasonal effects, would be good too. But DESERTEC and similar on a large scale seem unlikely for primarily political/stability reasons for the near future.

Wind Across the Pond 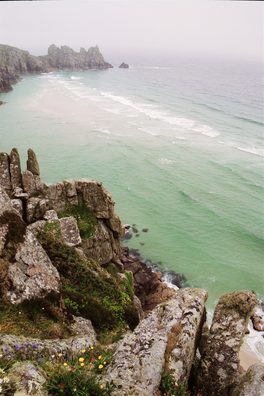 A bold leap, especially once on both sides there is enough intermittent generation to be hard to absorb locally, would be a transatlantic interconnection EU via Iceland and Greenland to Canada (also see Let’s Build a Global Power Grid: With a little DC wizardry and a lot of cash, we could swap power across continents and Global Renewable Energy Grid Project: Integrating Renewables via HVDC and Centralized Storage), or otherwise between Europe and North America (3300km Ireland to Newfoundland, 5000km England to New England, 5400km from Portugal to New York State), thus gaining 5h+ of solar/timezone difference and different weather as well as hydro and skewed local peak demand times.

Ambitiously, a floating transatlantic windfarms could be strung out along the interconnector to inject power from weather systems across the Atlantic itself (and the jetstream), for further firming of supply...

Starting from the 2002 EU goal of each country to have ~10% of capacity as interconnection, 10% of US/EU generation would imply something like 70--100GW of interconnection, which is basically bigger than the grid capacity of any of the countries on the European western seaboard, so would likely have to be spread out over them, eg Ireland/UK, Spain, Portugal, France, possibly even some via Iceland. And any build would presumably be incremental, with intra-US and intra-EU transmission reinforcement and renewables build-out.

Why INTUS? ELEXON refers to the various interconnectors to the GB grid, in (for example) the FUELINST dataset, with the prefix INT.

It is not clear if Brexit would make INTUS significantly harder to achieve. If the UK somehow remains in the European Energy Union then possibly not.

Learn about some of our thinking behind, and the mechanics of, saving electricity and gas @Home. #frugal #cutCarbon

A little of of the history behind saving energy and cutting carbon at home...