Updated 2021-08-28 08:35 GMT.
By Damon Hart-Davis.
Visit to Energy Solutions Expo at London Olympia: lots of renewables including PV and wind.
See: On A Tale Of Two Meetings: IPPR and CIBSE (2009)
Today (2007-10-10) I visited the Energy Solutions Expo in London's Olympia exhibition hall described as "Helping businesses to reduce their carbon footprint."
See also:

As you might imagine the show was dominated by RE technology, including solar PV and thermal, wind (HAWT and VAWT), biomass and heatpump. I got to speak to the CEOs of a lot of innovative small companies, including some whose products I'd seen on the Web.

The increasing use of RE technology is driven by a number of factors, including somewhat shallow PR / feel-good / Corporate Social Responsibility. Those might account for as much as one third of the demand according one candid MD's assessment. New tougher building codes are really concentrating minds too for example.

First I learnt a little about biomass RE. The preferred fuel is apparently wood pellets as they are the densest and easiest to handle, but wood chip comes in a close second. I asked what fraction of the energy generated has to be injected to harvest/dry/transport the biomass. The figure I was given (assuming a local source) was 5% or less.

I spoke briefly to the Carbon Trust, an independent company funded by the UK Government "to help the UK move to a low carbon economy". My suggestion was that they could play the role of "honest broker" to help get data that is currently tied up in government bodies (such as wind-speed data held by the Met Office) freely available to allow smaller companies and individuals to plan more easily for RE use. For example, my recent enquiry for local windspeed data has generated a £300+ quote (daily speed data for a year for one local weather station). We've paid for this once already as taxpayers...

One pleasantly-unexpected exhibitor was Xpelair with a (HAWT) wind gen, since Xpelair are more usually known for fans and extraction. The company and technology was bought in within the last few months, and the turbine on show was a ~1kW model. 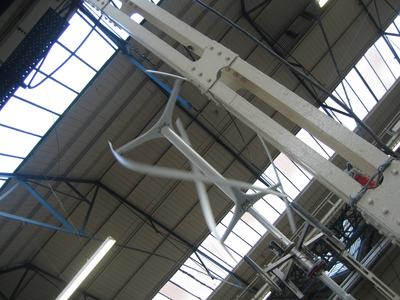 I spoke to Robert Webb, CEO of QuietRevolution, about QR's beautiful Darrieus VAWT. QR had a turbine set up and rotating on its stand (a 1/2 scale model of the QR5), and it was very visible and eye-catching. A few facts I gleaned:

Mr Webb thinks that the CF measure is probably not the right one to quote here, and is widely misunderstood anyway:

...the capacity factor is really a totally unhelpful concept, as people confuse it with 'efficiency' or some such. Capacity Factor is defined as:
CF = Annual Energy Yield / (Nominal Power Rating x Hrs in year),
and is completely dependent on the wind speed regime on site, and the wind speed used for the nominal power rating!

The important thing ultimately is not the CF but the economics per unit energy. Small urban wind generation can have similar economics to large remote wind turbines due to:

I also spoke to Steve Gray, MD of Cool Planet, about their "ground-source" heat pumps (GSHP). Cool Planet doesn't normally deal with domestic-size systems, but I asked him to humour me with the possibility of using heat pumps to eliminate or vastly reduce my domestic natural gas consumption of about 10kWh/day for hot water and cooking, and up to about another 20kWh/day in winter for central heating. Given the tiny plot of land my freehold house is on, RE solutions are very much space-constrained in a way they may not be in rural areas. Vertical boreholes of 70m--180m are made, no less than 5m apart, each capable of sourcing ~4kWh/day of heat (with ~25% energy input to drive the heat pumps, ie at a coefficient of performance (CoP) of 4), so I might need 2 or 3 to cover water heating and maybe up to 8 or 9 to cover space heating too. It would just about be do-able, and short of avoiding planting trees directly above the boreholes, because the equipment/holes terminates 1m below ground, no surface land space is consumed by the heat-pump system. The cost would be ~£1--2.5/Wh/day, eg a 10kWh/day system would be £10k to £25k.

A heat-pump system might be especially useful and "green" in conjunction with solar thermal to boost water heating. Also, grid-tied solar PV to drive the pump (Using the grid to store daylight PV energy to drive the pump in after dark.) A 30kWh/day mid-winter heat pump might require ~7kWh of electrical energy, which in the UK at that time of year would require ~7kWp of installed PV. Some support from wind power, at its height mid-winter, might be valuable.

Clearly, good insulation to minimise heating demand could pay off handsomely by allowing a much-reduced size of system all round.

Eliminating (or much reducing) dependence on natural gas is probably useful, given recent spikes in gas prices arising from a number of causes. Such as the UK now being a net importer, infrastructure problems, and supply difficulties actual or manufactured to the EU from Russia. It is said that gas supply shortages will result in gas-fired electricity generators being taken off-line first (as domestic gas supplies cannot easily be restricted quickly) resulting in electricity shortages or problems. (50% of UK electricity in 2007 is generated from gas.) The UK government states that supply problems are not a major worry. But recent sharp rises in prices make alternatives look more attractive.

Understand the optimum set-up for cloudy/overcast/diffuse light, and use of mirrors with PV. #solar #PV

Phil Turner, who lives on the Isle of Wight (just off the south coast of England) in a densely populated area, wrote to me early October 2007 to tell me of his "preliminary" experiments. He kindly gave me permission to quote him provided that I stress that his findings are very "early stages".