Updated 2021-03-18 21:12 GMT.
By Damon Hart-Davis.
Finding the best routes to help small London cleantech businesses deliver and thrive.
Brief notes and observations from the Better Futures launch meeting, involving some of the great, the good, and the go-getters! It took place on the (somewhat sweaty and gloomy) evening of 2017-07-19.
See also:

(I was slightly out of sorts having hot-footed it, carrying heavy bag and pull-up stand, from some collaboration at London South Bank University. Just the sort of support that makes cleantech happen, in fact!)

The Better Futures programme is intended to "help kick start the development of a clean-tech cluster for London, developing a hub for low-carbon industries in the capital" according to the London Mayor's office. The programme "will go towards supporting the SMEs, which will come in many forms including management and leadership support, marketing, access to co-working space and public and private funding support" according to Sustainable Bridges as lead delivery partner. 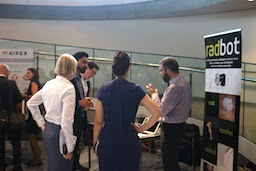 There was a good mix of people and organisations meeting at City Hall. SMEs such as OpenTRV, large business, government, academics and existing support organisations for SMEs such as Imperial and Climate-KIC. Firstly exhibiting with stands down in the basement. Then chewing the fat up on the top floor in "London's Livingroom". Turnout was around 70 people.

The keynote was from London's deputy mayor for business, Rajesh Agrawal. He and others kicked out impressive numbers. Cleantech isn't just nice cuddly feel-good to save the planet. It is also serious business.

Various luminaries give nominally 'provocative' circa five-minute talks. One such was BEIS' head honcho for the EEF (Energy Entrepreneurs Fund) and similar programmes: Cath Bremner, Head of Science Energy and Climate Change. 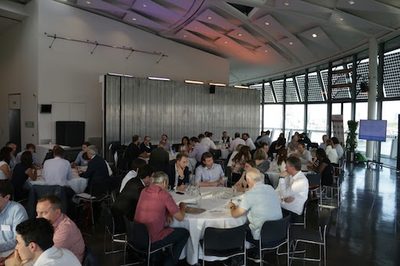 There were then round-table discussions on what could make the cleantech business climate better. Such as tweaks to BEIS (thus also Innovate UK) programmes. Also encouraging the formation of local cleantech 'clusters'. At the very least these could host and induce the fabled creative 'watercooler' chats!

(Which is not to overlook that the social and financial environment is probably already as good as it's been in my lifetime. Thirty years ago starting up a small tech venture like this was odd, now it's cool. There's all sorts of soft help and hard cash to help overcome the bumps in the road and make good stuff happen.)

I suggested that such meeting places with peers are useful to help understand what does and doesn't work. Also to be reminded that doing this stuff isn't weird. Oh, and that ideally no one should be more than about an hour away from their nearest one by public transport!

Even during the meeting/networking itself I was reminded why comparing notes with people interested in the same issues can be very fruitful. I hope for one or two specific positive outcomes for OpenTRV.

Images courtesy of Woon Tan: thank you!
Footnote: I rather wish that City Hall did not impose more onerous security than for example Eurostar. Forcing me to risk my trousers round my knees in reception, again. And preventing at least a couple of the SMEs from bringing in their products to show off properly.
Previous: Measuring Our Electrical Appliance Energy Consumption (2017-07-14)

Read how once we've bought a gadget, we measure what it uses, and work out how to use it efficiently. No vampires here please!

If you want to save cash (and carbon) on the energy that your appliances use then it helps to understand what they're up to! Here's what we did.