Hi, I'm Damon Hart-Davis, and this is a special Earth Notes podcast episode for 28th October 2019.

This podcast series started when I was asked to create a three-minute piece about my green home. I am visiting my dad and Sue this weekend, so I thought that it would be fun to get him to do the same about his home here in Devon. 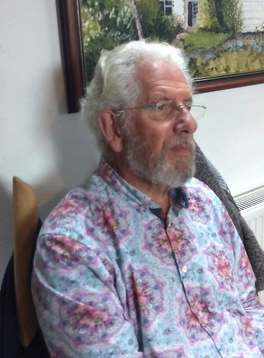 We live in a converted cider barn on the banks of the River Erme, which flows down off Dartmoor, and into the Channel at Wonwell, Wonwell Beach which is a wonderful beach, huge wide sand at low tide, with ripples running in both directions.

The cider barn was built probably in the 19th century. The bridge, which is attached to the house, was built in 1818, and it may be that the house was built at the same time. It was converted from a cider barn to a home in 1990.

It's got stone walls a couple of feet thick, and not enough windows, and it can be perishing cold in the winter, but we heat it either with underfloor heating downstairs, or with log-burning stoves which I've got in the corner of my room here.

And we have our own trees so we cut down the trees and we log up the wood, and there are zero miles or costs to heating.

We've got a big veg garden and we've grown masses of veg, well every year but this year particularly the beans have been good: the broad beans, the climbing French beans, the runner beans...

We've had parsnips and beetroots, we've had masses of chard, and all sorts of other stuff — the leeks are just about ready to start eating now.

We've got a lot of space for kids to come and run around in, which means that my grandchildren come here often, and so do Sue's grandchildren, and we've got space for them to stay so it's huge fun — we tend to have huge family Christmases. (Every other year, in between years they all go to the other parents of course.)

And we have loads of wildlife. We have eating from my birdfeeders under my window we have jays chasing off magpies, we have lots of tits of all sorts, spotted woodpeckers, and so on.

But because we're on the river, we also have herons, we have the original goosander, we have cormorants, surprisingly, so far inland (we're 10 miles from the sea). Quite frequently the cormorants come.

We have very occasional swans, one of whom landed in our pond, our fish pond, and was a bit suprised to find it couldn't swim more than about 5 yards.

We have the occasional goosander, we have kingfishers. Altogether it's beautiful.

There are dippers who under the bridge, our bridge, and this year produced four babies, which then ... When they are ready they dive out of the nest straight into the water and they stay under the water until mum comes back with more food. It's a wonderful sight! (Not that you can see them much when they are under water.) But learning to fly, it's great!

And then in the woods around there are buzzards, lots of buzzards. And one year the parents nested in our pine trees and we watched the young learning to fly sort of hopping from branch to branch going "Mewwww mewwww mummy mummy I can fly!" and all that.

We have enough space to plant a lot of trees. we've planted about 250, mainly broad-leaf native trees, oak in particular is the majority, but then ash, and rowans, and sweet chestnut, and wild service trees, and all sorts of other things, and it's great fun watching them grow.

We planted our forest, or "New Forest" as we call it, starting ten years ago. And then last year for my 75th birthday, we started a new copse in the middle of a field we own (which is usually full of sheep, so we had to put a fence round this copse), and there are now 90 trees in the copse.

And although they suffered horribly in the hot dry winds we had this summer, they are now recovering in the warm, wet autumn.

So, they are looking very good. There's all sorts of stuff there, from weeping willows to weeping beeches and African bean tree, as well as a dozen oaks, and twenty ashes, and so on and so forth.

So, we live a fairly green existence, we have solar panels on the roof, both for hot water and to provide electricity. And it provides more electricity than we can use, which is great. So, our electricity bill is £700 a year, and they pay us £1700 a year, which means we'll repay the initial cost in about 15 years.

Fairly soon now, I think, if they go on working.

We have to clean them occasionally, obviously, because they get covered in bird poo, and dust, and other stuff.

We're also a bit worried because we're right on the river, and a section of the river bank has collapsed. And that's at least partly down to us to repair it, and the Environment Agency are being rather difficult.

But, all in all, it's a lovely place to live. It's very peaceful. Nobody knows we're here apart from our children. And the postman of course — he occasionally brings us letters and bills and things like that.

The chickens provide us with some eggs, and the garden provides us with loads of vegetables.

So, that is our green existence...

FLAC 13MB unedited second take, not including the final top and tail from me.

The body of the recording was done in Adam's office, after one false start where he had extemporised for several minutes before I realised that nothing was being recorded!

I recorded the top and tail in the echoey 'great hall'.

I failed to get an in-focus photo of Adam and Sue, and even just Adam is a bit blurry. Ah well, it is at least reasonably contemporaneous.

This is the first time that I have done an episode unscripted. Audacity was a real help when transcribing Adam's words.