Earth Notes: 150 Mistreated NiMH AA Hybrid/LSD Cells: How to use them?

Updated 2020-08-05 20:10 GMT.
By Damon Hart-Davis.
Has anyone built a BMS for tens of abused NiMH AA cells to use with solar PV alongside 12V lead-acid?
See: On Website Technicals (2020-08)
I allowed somewhat more than 150 NiMH hybrid/LSD AA cells (GP ReCyko), nominal 2000mAh (and £1!) each, get run down to well under 1V each due to a bad software bug in some of my embedded systems code late 2016, then let them sit around unattended some months more for good measure! Can they be used or salvaged?
See also:

In most cases the circuit board being powered cut out at ~1.8V, so many of the cells were at about 0.9V each, probably not too horrible, but some were overdischarged way worse than that.

If they could be brought back to some sort of life, say 1Ah each ~1Wh, I'd quite like to harness them to make a 100Wh addition to my 12V-nominal solar off-grid system.

To do it sensibly seems hard, because I imagine the balancing issues will be horrible. I am envisaging a microcontroller looking after each string, say, and making sure that cells don't get too unbalanced (though maybe it could just tell me to take bad ones out manually).

Is there a sane way of doing anything more useful with the cells than recycling them?

(I have a smart-ish fast charger that does 4 individual AAs (or AAAs) at a time, and it was prepared to charge all of the 'dodgy' AAs. Sometimes it rejects cells as 'bad', and in that case it is usually right, I think!) 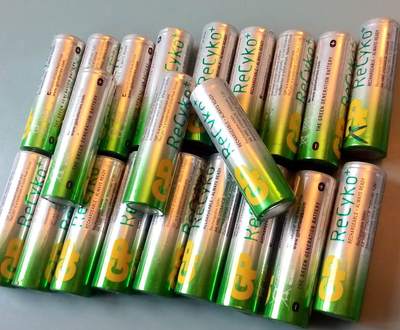 The Fieldlines crowd was very helpful, for example:

If your cells are a bit of a mix, I'd full charge them individually, then do a rough capacity measurement on each one (removing and duds), and sort them into matched sets of 10 (12v) as best you can.

I'm not sure how well they'll work if you're going to use them as parallel strings when charging off solar though - to fully charge and balance them you may have to do the strings separately, as Nimh like NiCd don't have a rise in voltage when they're fully charged, so one string will take more charge and heat up whilst the others sit there part charged; maybe a microcontroller to monitor the temps of the individual strings and disconnect each string when it starts to heat up?"

Having run stuff with a mix of NiCd and NiMH, it really depends on how far down they went. If this is say 0.8V per cell, I'm betting you'll be okay. I've brought back ones from as far down as 0.5 and they are still working. I usually de-rate them to 2/3 full cap. My cells range anywhere from the 325mA up to 2000mA. The higher densities have a harder time bouncing back, but rarely are they completely toast. In my regiment; I charge them aback up to full cap over 15hrs, then put them into a solar light for testing over the next few days. This actually works the batteries backup, the bad ones will not last like the others. A full days charge has my 2000mA units lasting a minimum of 6 hrs.

What seems plausible is to make a 'backup' supply to my off-grid Raspberry Pi system in the first instance (using less than 50Wh/day) and then the networking equipment (300Wh/d). The first would be happy with voltages down to maybe 9V and the power is requirement ~1W--2W.

For this I could use strings of 10 or 11 AA cells, with the strings being individually monitored rather than the cells, which is do-able.

At maybe 1Wh each still, 5 strings of 10 is probably good for about a day; the whole lot for 3 days, which is about the rule-of-thumb interval to expect to allow for no generation at all from a renewables system such as mine...

But other ideas welcome! (A couple of cells have gone to a school project...)

An example end-of-life (EOL), or rather end-of-charge, graph for an OpenTRV REV2 external sensor (4o). This pair of abused AA LSD cells failed after two months when they should last a year or two in this application.

See a discharge curve from undamaged cells in an OpenTRV TRV1.5 smart radiator valve with actuators as well as sensors.