Updated 2021-07-12 17:45 GMT.
By Damon Hart-Davis.
The carbon cost of fending off SPAM (and other networked malice) at home...
See: On Website Technicals (2018-10)
I run my primary Internet servers at home, including my main mail server and the Web site that serves this page for example. Noticeable effort and energy goes into fighting off attempts to SPAM me (~10,000 email attempts per day on this server) and to hack me.
See also:

(Back story: from the moment that my company connected to the 'live' Internet in the early '90s as one of the UK's first ISPs, we have run a firewall. Thus we have paid an energy cost to defend ourselves. Indeed, almost the very first packets I logged on our shiny new live connection were attempts to hack or SPAM us, in those days from South America...) 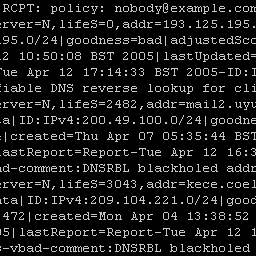 I use plenty of services hosted outside my home, such as DNS, mail and Web alternatives/secondaries. Never mind the entire network infrastructure that is the Internet. I wondered if I could estimate how much of my carbon footprint at home could be attributed to fighting off unsolicited and unwanted offers of sexy photos, guaranteed penis pills, how to MAKE MONEY FAST, power my house for free forever for only $49, and even how to buy cheap banner ads in the Daily Mail. Oh dear.

A slight complication is that my server is powered year-round off-grid. When there's anough left over even my Internet connection FTTC box and router are pulled off-grid too. And my laptop can run off-grid, manually.

Even when back on grid, my home grid-tie solar PV system generates about double our house's actual electricity consumption. Thus covering the carbon for that and the natural gas that still heats our home and our hot water.

Also, the carbon cost of keeping out the bad guys isn't just in my router and firewall and wasted network bandwidth. Nor does it stop at the fact that none of the CPUs involved get to idle properly or for long enough by being forever woken by SPAMmers' packets, for example. Also, SPAM that makes it past those defences that I have to waste brainpower on uses energy from food, which is some of the most carbon intense going. Energy efficiency is hard when your servers are being prodded by the bad guys at least every minute for 20+ years!

Let's keep things simple and pretend that the carbon cost of the power to run my services is something like the GB grid's probable 2017-05 ~400gCO2e/kWh and falling. Also that no more than that is fighting SPAM etc at home. (My local solar PV energy might otherwise have displaced carbon elsewhere on the grid.)

I'll also ignore the climate change impact of my lentil-powered fury when SPAM gets through all of that anyway...

The obvious direct energy costs per day at my house are:

Maybe it would be fair to attribute a few kg of CO2 per year directly to the on-going costs of fighting SPAM (OPEX) for me at home. That would ignore the amortised enormous infrastructure effort and complication (CAPEX) to design and maintain good filters for my mail client's filters, sendmail rules, SPAMHAUS RBL, Linux OS security, yadda, yadda, ...

Maybe several kg per day of CO2 could be attributed to energy wasted in the rest of the Internet in attempts to deliver bad traffic to me, eg 0.3g per attempted SPAM times 10k attempts per day.

(Footnote: today while writing this I seem to be getting a lot of phishing SPAM with poisoned but plausible links or attachments to open, and that are getting through the various levels of filtering. That really does consume expensive mental effort and network bandwidth.)

Somewhere the phishing blurs into low-level DDoS harassment and slow continuous break-in attempts and skiddies unable to rite code rite. As of 2017-10 I've had to adjust my stats gathering and add a filtering rule or three to defang 25% completely bogus mindless repeated downloading of one page from this site. A significant extra cause of CPU demand spikes on the server is clusters of ssh bruteforce break-in attempts... All this consumes energy (mine, and stuff then needing to be generated by gas-fired plant somewhere on the grid ultimately), and adds to CO2 emissions. If only the ultimate perps could be made to pay for the climate clean-up...

Do you heroically resist turning your central heating on until November? Do you make sure that it is off by April? Do you grit your teeth through a few chilly days either side? Do you have the room temperature set to a reasonable level, not sweltering, that does imply putting on a sweater inside when it's cold outside? (Assuming that you're in the UK or the northern hemisphere at least...)