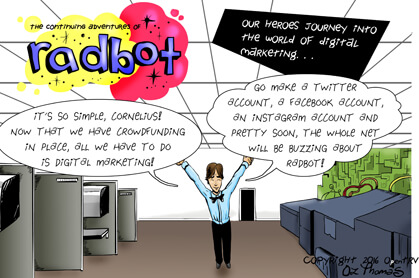 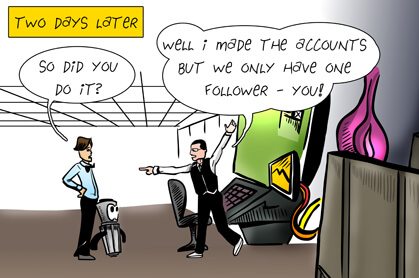 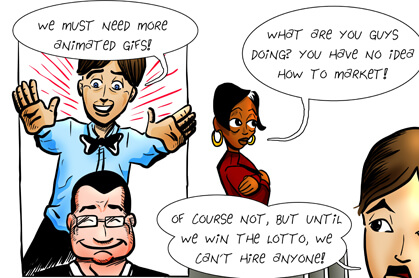 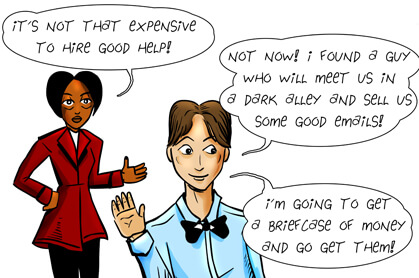 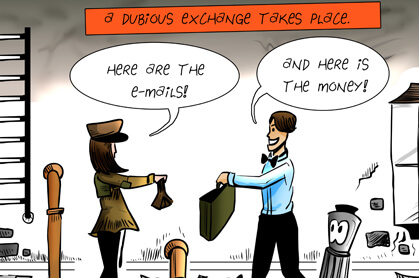 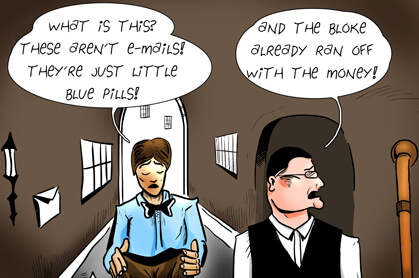 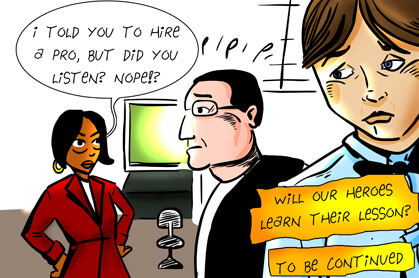 In truth, building a better mousetrap does not have the world beating a path to your door, all by itself...

As our caped hero is finding out, you need to let your potential customers know that the product of their dreams is available. Or maybe convince them that your new product is the dream that they hadn't quite got around to having yet. That's marketing.

As our heroes are also finding out, just setting up a dozen social media accounts is also not enough. We've heard of content and strategy and engagement (and inbound marketing) too!

Tune in next time to find out more about Radbot's attempts to outsource the crowdsourcing grunt work!

It's easy to be cynical about marketing, but as I say over at el Reg: Marketing... or how I lost my soul to Lagos:

... We don't have ulterior motives (except saving the planet) and are genuinely trying to produce a device that saves money and makes lives simpler.

I am trying to make sure that we don't over-claim the abilities of our tech while trying to still have good copy that will attract attention. Promotion without lies, even if others are not necessarily so scrupulous or just don't have the tools to be accurate scientifically in their claims. Not many retail marketers have PhDs in ethics and physics, which may also be a good thing if we don't want be be reduced to beige boredom.

We're also not trying to sell a piece of use-once tat. We are aiming for a life of at least ten years for these devices, and again that should inform how we pitch this to the public.

As is their way the el Reg "commentards" were quick to put the boot in, though we had various people come to our aid in the comments, not astroturfing! In particular, Simon Hobson nicely summarised what we're trying to achieve:

So what is so special about these? Well to start with, it's a solution to a real problem, not (like those Internet of Tat devices) something looking for a problem to solve. I'm sure we've all met the people who just don't understand the concept of a "thermostat", and for whom the display and controls of a time programmer might as well be written in Klingon.

That's why these don't have a time clock or programmer. The only central hub is the relay box to connect to the boiler - so the boiler automatically runs only when there's at least one rad calling for heat. So connect the relay box to the boiler in place o the room stat, fit the heads, set the room temperature you want. Done. There are very few people who can't grasp "turn the control towards red for warmer room".

If you want to hook up to a computer (or a server on the internet) and log data, then you can do that - but you don't have to. One target market is social housing where remote monitoring of heating operation could allow alerting if someone has obviously got something really badly wrong so the tenant can be contacted with assistance before they suffer the bill shock a few months/weeks later. I can certainly think of people for whom that would be a good idea.

To get someone to invest, which might be for shares ("equity") or with a loan ("debt"), the golden rule is that you need to show the person with the gold that you have a capable management team. (If you can sell oil to the arabs does it matter exactly what the product is?) Then preferably show that your product/service works, that there is a market for it, and that people are prepared to pay for it. That can often be boiled down to "team, traction, data". One investor may take a punt on us without those, another may say no. (You have to expect most to say no, whatever your case, for many reasons and non-reasons!)