Hi, I'm Damon Hart-Davis, and this is a mini Earth Notes podcast episode for 19th October 2019.

From the last "battery sounds" episode, this is my PV generation as measured by the Enphase system, with 15-minute samples for 13 months. This is more noisy than you might expect, as sunshine is significantly intermittent during each day in the UK!

That intermittency is caused by cloud cover changing, and individual clouds' shadows passing over the PV system. Those fluctuations can have quite an effect at the local substation that many PV systems are connected to, given the substation's catchment area is unlikely to be the several miles across needed to start dampening such things.

This is what happens when I apply a low-pass filter to cut out anything much faster than a daily cycle:

I do have another source of this PV data, that runs for longer, and has faster sampling.

From July 2014, I captured grid-tie PV generation stats live via my Sunny Beam. Initially that had approximately 5-minute sampling, later improved to 1-minute sampling. Nominally, that has 'audio' content to over 500kHz or probably 25 times the top of even good human hearing! This may be enough bandwidth to generate decent video alongside an audio track in future.

(There are much-less-frequent samples going right back to February 2008, mainly daily, as the first part of the PV system was installed.)

Here is what 63 months of real-time PV generation [data] sounds like, fully covering 5 winters, with similar low pass filtering and resampling to before:

As before, I've taken (PV generation) logs and turned them into a WAV. Some at 15 minute intervals, and some at 5 and 1. All compress a year of data into a second of audio. The last one is 5-years' worth.

From last time, PV generation as recorded by the Enphase with 15-minute sampling, then N/R (.wav):

Then PV generation as recorded by the Enphase with 15-minute sampling, then: Normalize, Low-Pass Filter at 500Hz with 24dB/octave roll-off (to suppress anything above 'daily' and make seasonal stand out), Normalize, Resample: 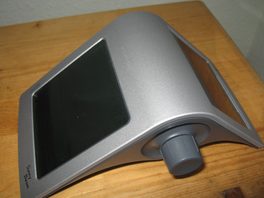 I capture live PV grid-tied generation from the 5.16kWp of solar panels on my roof (half east-facing, half west-facing) via my SMA Sunny Beam. Initially I captured about one sample per 5 minutes, but lately every minute.

There are four SMA Sunny Boy grid-tie PV inverters in the roof, each handling a separate quarter of the full PV array. A "Sunny Beam" wireless monitor listens to radio transmissions from all four of them. The stats are displayed locally on the device, by inverter and in total. The Sunny Beam is plugged into a USB port on my Raspberry Pi, which allows me to capture an aggregate generation sample each minute.

Following on from the "rad sounds" I decided to "audify" some battery data. Enjoy!