Updated 2021-12-11 20:54 GMT.
By Damon Hart-Davis.
Learn how our Tempra MHRV helps keep humidity down in the kitchen and the air fresh, even when drying laundry in winter. #frugal #cutCarbon
See: On the Pasta Perfect - Two Pots with Thermal Wrap: Review (2008)
Why MHRV? As we reduce 'uncontrolled' ventilation to reduce heat loss/demand, we need to introduce controlled ventilation to keep levels of humidity and CO2 (and other pollutants) down. MHRV does that efficiently, with low heat loss per unit of ventilation.

(There are various other names for MHRV, such as MVHR or Mechanical Ventilation with Heat Recovery. SRHRV ie Single Room Heat Recovery Ventilation is a more specific term for the particular style I review here. Also energy saving fan or energy-efficient extractor fan. See the glossary.) 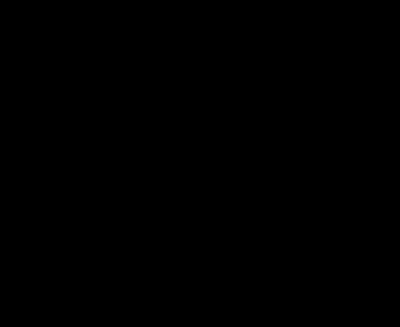 Why the Tempra P?

As of October 2012 we'd refitted part of the kitchen and were thinking about doing the rest. The work included replacing the existing gas stove and replacing the old passive (air-grille) ventilation with MHRV such as an HR-25. However we wanted manual boost only, since an automatic humdistat would be likely to annoy us by coming on noisily with us present in the kitchen, given our experience with the bathroom HR25H.

The Kair HRV150 was also a contender though takes 9W in trickle mode to shift ~5l/s, which seems poor, while claiming up to 86% heat recovery.

The Vent-Axia Lo-Carbon Tempra range came to my attention and looked interesting. The 'P' pull-cord model for boost mode is ~£180, up to "78% efficient", is marked as suitable for kitchens, trickle mode consumes ~2W shifting 6l/s (22m^3/h), or ~5W @ 9l/s (32m^3/h) in 'trickle high' mode, rising to 13l/s (47m^3/h @17.2W) on boost and even a little higher 'intermittent', so similar to the HR25 in extract throughput and a little lower heat recovery. The Tempra is balanced, though can be put in summer extract-only mode.

In the end the Tempra-P seemed to be the best fit for our requirements, and was relatively cheap at a little under £180 all-in from DEALEC. (DEALEC was also helpful with delivery timing, where others are often indifferent...)

Flue and Other Issues

I asked the following on eBuild:

I'm trying to find a space for MHRV and my current thinking is to use the same through-the-wall single-room Vent-Axia MHRV HR-25 as we have in the bathroom.

The most obvious spot on an external wall is a couple of feet from the gas boiler flue and roughly level with it.

I was referred to this very useful document: Location of flues to prevent ingress of gas and oil firing flue gases under all weather conditions (PDF) from 2006, and also a discussion "distance between boiler flue and MVHR intake" at the AECB.

The nub seems to be to keep the flue and vent at least 30cm apart (and not under a common overhang, which does not apply to us). I should possibly check 'Approved Document J' and BS5440 table C1.

The HR25 installation documentation says: "14. The external cowl of the unit must be sited at least 500mm away from any flue of gas or solid fuel appliances. This is to avoid back flow of gases entering the room."

Inspection suggests that we could ensure a 50cm horizontal spacing and have the MHVR pipe a little below the flue level so as to be out of the way of the buoyant warm flue gases.

2012-10-08: just spoke to local building control and for a balanced combi flue (as mine is) then regs / Part J says 300mm+ (else 600mm+) to my MHRV intake is fine. Now seeking permission from the housing department for the works (it owns the path over which my pipe would emerge), to avoid a trespass.

2012-10-09: A Vent-Axia "Technical Support Advisor" recommended "the tempra for ease of maintenance and replacement" over the HR25, and as to spacing from the flue "although 300mm will be sufficient if you can be 500mm away then this would reduce the risk of backfeed."

2012-10-22: received a letter from RBK Housing today permitting me to install the MHRV (subject to 300mm clearance from other wall penetrations, etc).

2012-11-03: I have read The Laundry Design Guide. Though I do not agree with some of their suggestions such as reintroduction of hot-fill washing machines (hot water simply won't reach many machines before they've filled with the water already in the pipework!), I do think that the 8l/s/person target ventilation figure is useful. That would keep CO2 levels acceptable at below 1000ppm in the main, and a Tempra is thus about 1 person's worth on trickle, 2 on boost. I suspect we'd mainly manually set boost mode when RH% is getting too high, such as during 'passive drying' of laundry. 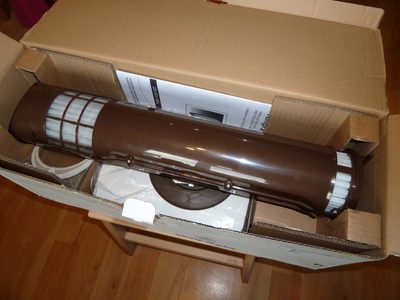 2012-11-19: Tempra arrived today (pack shots); seems sleeker than the HR25 in various ways. The heat-exchanger of multiple plastic pipes running the length of the vent looks robust and simple.

2012-12-26: Tempra installed today (pics) by the builder: seemed to be less hassle than the HR25H, though that may just be practice, and now we do know the wall build-up! Seems about same noise or less than fridge/freezer when running. Seems to be dropping the RH of incoming air as expected. On pull-cord activated 'boost' it is noisier than the dehumdifier. Have positioned the isolation/off switch where Jean can get to it fairly easily. (I switched the ADSL modem to off-grid solar PV while the power was off, ensuring that earth.org.uk didn't go off the air, amongst other things.) 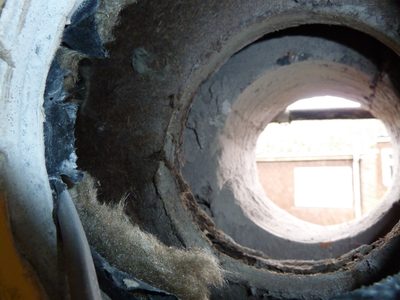 Note that we now have a fairly good idea of the wall construction for future works (such as IWI/superinsulation):

Note that there are still fixed vents in the kitchen wall (on the far side of the room from the Tempra) that should remain until such time as the gas cooker goes to avoid CO (carbon monoxide) and other risks.

What are the Lo-Carbon Tempra Specs?

We are using "Trickle Low" and "Boost" factory defaults I think, with "Trickle Low" being by far the most energy efficient in terms of flow rate per Watt (~0.3W/l/s), and the intention is to leave the fan on 'trickle' all the time (possibly not at night depending on noise) with only the occasional boost, eg for a new load of washing hung up to dry.

The Tempra's trickle flow represents about one person's ventilation needs.

Is the Tempra Noisy?

No, unless you put it in boost mode to help clear the air quickly! Then it is just like any other extractor fan.

(Almost 7 years after installation I overheard my son asking incredulously something to the effect of "We have a fan in here?" so it can't be that bad!)

Does the Tempra Work?

Yes. Over time we're decided that it really helps with drying the laundry for example, and it's quiet enough even at night. We don't use boost much.

2012-11-28: initial observations suggest that it does indeed do the job, especially when it's cold (and thus low-humidity) outside. The kitchen air is fresher and warmer than I'd otherwise expect, and humidity in the kitchen seems to be brought down quickly, eg from 88%RH after with cooking and supper to 78% in less than 30 minutes, and kept to 70%RH or lower even with laundry drying.

Boost mode helps a bit when RH is high, but the slow-and-steady 6l/s trickle mode is likely much more efficient at keeping RH down over a day. Boost is OK to leave on when out of the kitchen and hardly audible from the alleyway, not much more than the gas flue, so unlikely to be a nuisance and not much different to the portable dehumdifier.

After a few nights we're still deciding if the trickle mode is too noisy to be left on all night (as the fan is directly below the master bedroom).

2012-12-14: Although for noise reasons we have not had this kitchen fan on every night, it has been on through sub-zero external temperatures, and in contrast to the HR25H in the bathroom seems resistant to getting iced up and unbalanced and rattling and needing to be turned off to recover. This is possibly because the Tempra fan is on the warm side of the exchanger.

The fan has been helping laundry dry (sometimes we put it in boost when we're not in the room and there's a fresh load out) and, I think, helping to avoid moisture migrating out of the kitchen to the rest of the house, to the point where, in conjunction with the cold dry air outside, we've needed almost no dehumidifier use and RH is staying around or below 70% most places.

I'm pretty sure that I've not detected any smell from gas-flue exhaust getting back into the house via the MHRV,

2013-01-17: with overnight temperatures down to -4°C the HR25H started rattling badly (presumably from ice on the fan) but the Tempra was fine, possibly because the fan is on the warm interior-side of the unit.

2017-04-17: still going strong, still quiet and has never frozen up or failed; would be nice if there was a good way to clean it! Seems to have a sensible delay before coming back on after power is restored, which could help avoid damage to the unit during mains troubles, and is also kind to the wiring and grid at such moments...

Find out if the Terrier i30 was usable and worked replacing a mechanical TRV in a real home.

This programmable Thermostatic Radiator Valve (TRV), AKA "electronic TRV" ie eTRV AKA Programmable Radiator Control (PRC), has the primary feature that it isn't set for a fixed temperature. Rather, it has a temperature profile against time. So rather than having rooms heated whenever the rest of the house is, their heating can be trimmed within that time and with variable temperature to suit when the room is actually used.