Updated 2020-01-26 20:11 GMT.
Are you leaking all your warm air in winter, and losing your cool in summer? Find and fix unplanned ventilation... #frugal #cutCarbon
See: Aerogel on The North Face (2015)
A big issue when making existing houses more efficient for heating (and for cooling, though less often an issue in the UK) is the loss of heated (or cooled) air through unplanned ventilation. Such as the huge hole cut in the wall by a plumber to make his/her job easier. Or your pretty but rattling old Victorian wooden sash windows. Here's how to stop the gaps...
See also:

Surely all new buildings are built to be leak-free so there's no problem? Well, firstly there has to be adequate ventilation one way or another, and secondly the (UK) housing stock is replaced very slowly. So the vast majority of houses in (say) 2050 are already standing. Something needs to be done to improve the performance of the existing stock. Finding leaks should be part of each building's "energy audit".

Buildings need some planned ventilation so that people can breathe, so that moisture and bad smells and volatile toxins can leave the building, and in general to keep the place mould-free and pleasant to be in. In the UK building regulations "Part F" deals with this.

This planned (Part F) ventilation has to balanced with the "Part L" conservation of fuel and power rules. "Build it tight, ventilate right."

In some designs such as the highly-efficient "Passivhaus" concept passive ventilation may be replaced with a whole-house MHRV (Mechanical Heat-Recovery Ventilation) system to ensure rapid turnover of air and control of humidity while avoiding losing too much heat (or gaining too much) from outside.

For existing stock achieving Passivhaus standards of air-tightness and heat efficiency is very unlikely since these features need to be designed in. But we can tackle many of the more egregious problems with our own homes.

In essence the Part L rules for new properties place a limit on unplanned leaks of approximately 10m^3 of air per m^2 of wall/roof/floor area per hour at a standard 50Pa over- or under- pressure (~0.05% of normal atmospheric pressure, like leaving a door open in a strong wind).

Various measures have already been taken and remain to-do. Major ones include improved insulation of our walls/floor, possible addition of solar hot water, and reduction of heat-loss due to air leaks.

To this end I wanted to see how big a part reducing air permeability ie unplanned ventilation, might play in reaching my goal. Given that the house is over 40 years old and built for public-sector rental, my guess was that it might be leakier than an unhappy government ministry, with plenty of scope for savings.

My first difficulty was locating someone to do the work. Searches for "air leak testing" and similar did not seem to hit pay dirt.

A quick word with the sustainability/efficiency man at our local council suggested that the magic term would be "air pressure testing" since that is specified as part of the building regulations. I know now that "air permeability testing" and more specialist terms such as "BINDT" (British Institute of Non-Destructive Testing) are also helpful.

Searches then quickly turned up a number of competent firms. So I arranged for two to independently do the pressure test to compare methods and results to show them here. Usually one test would be quite sufficient.

I also had one of the firms perform efficiency tests that go along with the air-pressure tests, including the "SAP" certificate now required before selling/renting a house.

When the next round of improvements is done I may repeat the leakage and efficiency measurements/certificates to test the effectiveness of the works done. Again, this would not normally be necessary.

Incidentally, I'm grateful to the individuals from both companies for answering my endless stream of inane questions and allowing me to photograph the equipment and process (and their ears)! 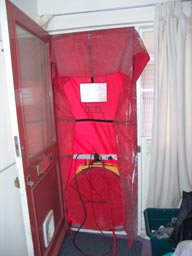 The test itself is basically all fairly painless and simple and can be completed in an hour or two.

The house is measured internally to allow its heated volume and external-facing surface area (walls/floor/ceiling) to be computed. The BINDT/SAP test for UK building regs uses a leakage per unit surface area, but Passivehaus works in terms of building volume and air turnover time for example; however, given the parameters these values are easily interconverted.

All planned ventilation is then stopped, eg windows and doors shut, extractor fans turned off, passive vents covered (with masking/technical tape or plastic film). Also, if the property is new, all plumbing traps (eg U-bends) are filled to ensure that no air can enter/escape that way. Any open-flame appliances such as a gas stove must be off. Then a door, often the front door, is opened and an adjustable canvas-covered frame is fitted into the doorway. A fan, in both my tests large and circular and fitted into a hole in the canvas, blows air into or out of the house instrumented to record the air flow (m^3/h) at a given pressure. This is known as a "blower door" pressure test. The fan may be controlled by laptop or a stand-alone handset. The pressure differential set up of around 50 Pascals over or under (less than one tenth of one percent of normal atmospheric pressure) is gentle enough not to do any damage to the house nor hurt anyone in the house at the time of the test. I had my entire family including a 5-month-old baby in the house during the second test and no one seemed to experience any discomfort.

By automatically measuring the flow rate at a set of pressures around the target it is not only possible to accurately establish the leakiness of the house, but also whether the flow is "laminar" (smooth, though big holes) or turbulent (eg through lots of small leaks), which may be useful in tracking down the location and nature of the leaks.

Leaving the fan running, it is possible to walk round the house and feel draughts/leaks with the hands, or see them using a smoke pencil, making a note of major issues that may need to be fixed. Note that with the house overpressured smoke is expelled neatly through leaks making for a simple and clear visual indication, but with underpressure (and especially on a cold day) leaks are more easily felt for non-visual detection (though there may be other visual clues such as cupboard doors pushed open).

After the test all planned ventilation is restored.

(It may not be possible to perform the test if it is too windy outside, so checking the weather forecast if possible before booking may be wise.)

See photos from the both rounds of testing.

First Tophouse Assessments Ltd came 2009-03-30 to do the pressure test plus a bunch of related efficiency measurements/certificates.

The headline permeability figure from Tophouse was 7.21m/h.

Building regs specify a ceiling of 10m/h (or m^3/(m^2.h)), so ours was acceptable even by modern standards.

Tophouse spent a large chunk of the day with me to produce other relevant metrics/certificates, for example the SAP Energy Performance Certificate which for example computed a CO2 emissions figure (1.9t/y) pretty close to the 2.2t/y that I came to based on detailed meter readings.

In preparing the certificates various parameters of the buildings had to be measured (such as permeter and window sizes) and estimated (such as window seal tightness and wall composition and U-values) or filled in from supporting tables given typical values for our house's age (1968, SAP 2005 band E) and construction (timber-frame).

Smoke pencils were used to find leaks with the build over-pressured thus driving the smoke clearly out through the offending leaks (though with underpressure it is easier to feel leaks by hand I think).

Some major leaks found during this process were:

Looking at the internals of the SAP report, in particular the estimates of how much heat energy is being lost where, has made it easier to focus effort and expenditure on the right places.

Next UK Air Testing independently repeated the permeability test on 2009-04-06.

The headline permeability figure from UK Air Testing was 7.11m/h.

The closeness of the result to that from Tophouse Assessments indicates that the calibration and methodology is indeed good enough that either result would have done, and indeed that someone testing their own house could shop around on price confident in an accurate result from any competent assessor.

A smoke pencil was used to help find major draughts/leaks with the fan running, and some were found that had been overlooked before, including:

Taping the airing cupboard door, plus the old vent and piping kitchen leaks, dropped the permeability to 6.29m/h, ie by over 10%. (Just the kitchen leaks taped had permeability down to 6.7m/h.) Uncovering the kitchen (planned) air vents only raised it to 6.6m/h, showing that we had more unplanned than planned air movement in the kitchen for example!

Other leaks picked up were (some new):

A pearl of wisdom from today's tester was that you should regard the internal finish/envelope of each room as the main leak barrier and NOT assume that holes in internal walls (eg for wiring) are not a problem. In our case the biggest leaks are to/from what appear to be interior voids, at least at first blush.

The permeability figures obtained of ~1470m^3/h exchanged/leaked for a dwelling/house of heated volume ~190m^2 indicates ~8 complete air changes per hour (ACH) at 50Pa pressure delta, or ~20 times the typical Passivhaus n50 value of 0.4/h and more than 12 times the Passivhaus n50 limit of 0.6/h.

The obvious action is to buy/borrow and deploy a good foam gun (or more substantial weaponry for bigger holes) and block all the serious leaks, especially those around the kitchen and airing cupboard pipework/services, plus some more delicate resealing of the window in my daughter's bedroom to silence the low whistling sound in strong winds that she objects to. This "retrofitting" should be cheap and easy enough even for me to do, and is classic DIY "weatherization" (US) or "weatherproofing" or "caulking"/"calking", albeit internal.

Some of this may be pre-empted by larger works such as internal wall insulation which should deal with such problems in bulk.

The old boiler flue/surround from the kitchen, and the foul-air vent which contains other pipework such as overflows, are probably both open to the air on/in the roof and thus providing unwanted venting of the interfloor space to the outside, so finding some way to seal those well would probably pay good dividends, and reinforce gains from sealing the interior leaks to the interfloor void.