Measuring How A Room Behaves Thermally

By measuring the thermal performance of a room over an extended period, and especially through the heating season, I got an idea of any further work that could be done in that room. And indeed elsewhere in the house (for example in reducing unwanted air infiltration) to further improve performance.

We're never going to hit Passivhaus levels of insulation or air-tightness. But this should give us a clue where real remaining returns may be lurking, getting us closer to the goal of no space heating needed at all, and thus minimised bills and carbon footprint.

Nick Taylor very kindly donated/lent me a number of bits of kit 2011-10-09, including four iButton temperature sensors. (DS1921G-F5 "Thermochron" devices and USB reader; each is capable of recording 2048 data points at regular intervals.) With them I hope to monitor temperature in and around the room over an extended period (a year or more if possible). I aim to use sampling intervals of ~1h reflecting the time scales of forced temperature changes, eg from putting rads on before bed.

I expect to use a finer granularity to start with. Then when I get bored of crawing around in the loft to download data, etc, drop to a coarser measurement interval. 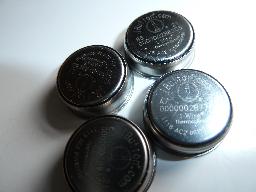 For the start of this 'mission' beginning early afternoon 2011-10-09, expected to run until about the start of November, I have reset all four iButtons to take samples every 30 minutes (in °C) (so should last just over 42 days before filling up), no roll-over allowed, synced to my laptop's time and with low- and high- temperature alarms at 0/40. Initially I am going to let them sit together to calibrate against one another.

I will deploy the ones that I can (into the loft) later the same day. But the others may have to wait until work on the room is completed which may take several more days.

Initial samples when all four were left stacked together on my desk at an ambient temperature of ~19.6°C, in .csv files: 1, 2, 3, 4. All are showing in the middle samples 19.5°C or 20°C which indicates an accuracy/precision of 0.5°C and all reasonably close. The timestamps in the .csv files indicate BST, ie local time, rather than UTC, so I may have to be careful with 'missions' that cross BST/UTC boundaries.

After about 24 hours I took current samples from under-floor and in-room. (The room has had the windows wide open all day and night to dry the plaster.)

These show the floor void to be a little better sheltered than I'd feared. (The temperature dropped much less overnight than in the room.) See .png graph.

2011-10-15 17:00 BST: with all the internal wall insulation (IWI) work done (including the aerogel-filled window reveals today) I will be closing the windows for a few days. I will keep the doors shut at night, to get an indication of the thermal performance of the rooms unheated. Forecast daytime max temperature is ~16°C and night min ~6°C.

2011-10-16 10:30 BST: with the room windows closed, external temperatures dropping, and no heating on, the temperature under the floor can be seen to be dropping much more at night. Probably due to the draught/infiltration that can be felt by hand from outside!

2011-10-21: radiators being fitted (etc) in late afternoon/evening (and air-infiltration under the floor greatly reduced with squirty foam), so windows open and iButton 1 displaced to behind the door for the duration. After all done, windows closed and another set of readings captured:

(2011-10-23: in early afternoon briefly opened window to dissipate some paint fumes and let in some sunlight and again briefly a couple of times more, but room otherwise remaining shut/curtained from morning of 22nd for about 3 days.)

2011-10-25: now with all four sensors graphed, the dramatic swings in the loft temperature (4/purple) can be clearly seen, while over the last 3 days the underfloor (1/red) is much more stable suggesting that the air infiltration probably has been reduced.

2011-10-30: with the room now occupied for a few days (and heating still not on) temperatures seem to be drifting slowly upwards. (Only sensors 1 and 2 updated this time. Sensor 2 has moved to the bookcase.) Note that the .csv files a given in local time, so there's a 'repeat' hour starting at 1am on the 30th as the clocks went back. (A spike up to 20°C on sensor 1 and 21°C on sensor 2 can be seen at 12:12 as the readings were taken on the laptop; glitches to be expected.)

2011-11-06: external temperatures have been between about 14°C; day and 11°C night. (Only sensors 1 and 2 updated this time.) There is just over a fortnight's life left of this mission: I still expect to see heating on before its end.

2011-11-07: after sudden panic that I did not know actually depth of loft insulation (which I then measured as 240mm--300mm approximately), I took the opportunity to take readings from the two sensors in the loft (and move the 'above ceiling' sensor 3 more directly over the room. Did not want to disturb the carpet again so did not read sensor 1.

2011-11-14: after death of W7 laptop (again) spent much of the day trying to get some sort of reader (preferably Java) working on Linux (SheevaPlug) or OS X. So readings for sensor 2 reflect that of my desk rather than Morgan's room! I am managing to cobble something together using owfs directly on the SheevaPlug, having failed to get anything Java-y to work there on the Mac. The initial data set showed a bizarre 31-day offset, ie one month out.

On my system command to mount owfs is:

I've started mission 2, with buttons in the same places. There is now a more (synchronised) sampling of once per hour on the hour starting at approximately 2011-11-18 15:00 UTC.

The owfs reader still sees a time 1 month out from the Windows 7 reader. Grrr.

2011-11-20: a quick sample of the in-room sensor (2) shows that temperature was never below about 18°C overnight even though outside was about 4°C at 07:30-ish. Handily preceded by a little late afternoon sunshine ie local greenhouse effect!

See .png graph. (Note that MHRV went in a couple of days ago, so there should be less drop in daytime temperature inside from opening windows to air and disperse humidity.)

See .png graph. (The expected reductions in room-temperature fluctuations seem to be there.)

The temperature in the loft actually dipped below freezing a couple of times for the first time this winter.

It is difficult to tell for sure without some slight effort in analysis, but with the MHRV the daily swing in bedroom temperature is down to about 2°C or less from 4°C-ish with having to open and close windows each day to dispel moisture.

The temperature under the floor is still getting lower than I'd like, presumably through a mixture of air leakage and thermal bridging through the joist that the sensor is next to.

(It is warm and sunny enough today to open windows and turn off the MHRV!)

Now that the bulk of winter is behind us I hope (2012-03-04), I shall measure a different set of temperatures, though still including (2) from the boy's room in the set.

BTW, the *nx "date -d @sec" command is very useful for checking the outputs of the owfs-extract.sh command (eg to adjust the fudge factor), where 'sec' is the time in seconds since the *nx epoc.

The living room temperature rises higher than I expected (overshoots compared to the normal evening setting of ~18°C) and falls faster than I thought. Note that the heating goes off on the timer at about 21:45.

The overshoot may in part because of the way we turn up the temperature to force the heating on if necessary a little while becfore the children go to bed (and we set their rad TRVs to 2 at that point), and/or it may partly be the mechanical hysteresis in the room thermostat.

2012-10-30: full sample set after several cold days and no central heating yet; note that the house was empty for a day and then had one occupant for two days up to today (still with probable hour offset):

2012-11-08: full sample set with central heating on a couple of days (still with probable hour offset):

It is clear that the in-house temperatures are all fairly close, but I think that it's also evident that the living room seems to be warmest and the girl's room (with the least good insulation) coolest, which probably argues in favour of beefing up the insulation there. (I'm also going to at least test a smarter electronic TRV in her room soon.)

See .png graph, and some histogram data in particular noting the much narrower temperature range inside than outside and the lower (18--19.5°C) modal temperatures for the bedroom than the living room (20--21.5°C).

2013-03-29: full sample set, with rest of family away so internal temperatures allowed to fall in monitored rooms for the last few days to ~14°C, and what may be less temperature overshoot above the 18--19°C target in the living room (in getting the children's rooms warm before bedtime) over the last couple of weeks since the OpenTRV V0.09 unit was deployed (there and elsewhere):

2013-04-05: full sample set, family back so temperatures back up but less than before to achieve comfort:

As of 2013-11-02 I am starting mission 6 with the same locations and (4 hour) sample interval as mission 5 to allow collection of just under one year's data continuously.

There is a break of a couple of days between the end of mission 5 and the start of mission 6. Note though that the heating is not yet on so this run will capture the full heating season.

The buttons in the bedrooms have been tucked into a bookshelf. So they are probably 'seeing' the solid furniture temperature rather than air temperature. This may be misleading with shorter and more targetted heat-on times. So I'll attempt to expose the buttons to a little more air-flow by simply moving them nearer the front of the shelves.

2013-12-28: full sample set, with girl's room now on OpenTRV-regulated 18°C nominal bed-time target. The house was then fully unoccupied for a few days prior to the end of this period. Note how the temperature of the least-insulated (girl's) room dropped the most:

2014-11-10: the iButtons filled up a month ago, and I now have much finer-grained real-time data coming in over OpenTRV sensors (see below), so I have turned off the real-time clocks in the iButtons to conserve whatever battery life they have left so that I can possibly deploy them on ad-hoc projects elsewhere.

It is also interesting that while exterior temperatures range from about freezing up to ~30°C, the internal range is typically ~15°C--20°C, being pushed up higher in summer but still being more moderate.

As of the end of April 2014 it became possible to use the OpenTRV units installed around the house to provide automated 'live' monitoring of temperatures to 1/16th C precision and with approximately 4-minute sampling. These readings overlap with the iButtons and can also provide live on-time/HDD measures with further development work.

(Note that both the study and kitchen readings are slightly high, ~0.5°C, from self-heating from their radio receivers being on all the time as hubs.)

Note that on 2014-05-26 to 29 where as an experiment I kept the doors closed and curtains drawn for rooms 1g (only a small amount of IWI) and 3l (complete IWI). The temperature falls faster and further in 1g. 2b, also well insulated, behaves like 3l (though its door and curtains were mainly open). See also light levels for those 4 days and for the end of May.