Updated 2019-10-06 16:42 GMT.
Learn about the highest-performing robust wall insulation for where space is at a premium, such as in big cities. #aerogel #IWI #insulation
See: About Our Greenish Home aka 16WW, with Bonus Bats and Sparrows
See also:

Sam Proctor of Proctor Group contacted me 2008-05-15 having seen my mention of the Spacetherm product here on Earth Notes. He is in charge of Spacetherm development. He offered to chat to me about existing and upcoming products.

(In fact, he told me about one new product that I'd very much like to try this winter as it would fit in with my general insulation-improvement plans. As of 2010 I think that it is well known that they have an aerogel-based insulating 'wallpaper' in the works, hopefully due out this year.)

The Spacetherm product at core is a silica-gel-derived aerogel with an embedded polyester fabric matrix to reduce brittleness. That's aerogel as used by NASA in the Space Shuttle heat-resistant tiles. 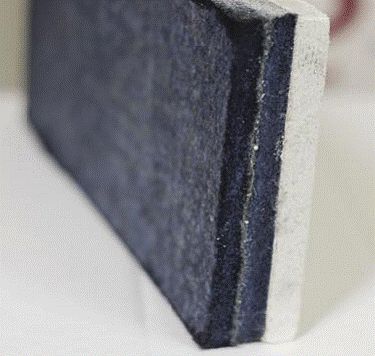 None of the manufacturing is environmentally unpleasant as he explained it. In particular, by being able to avoid blowing agents used in other products, there are no harmful leaks/emissions of these agents possible. Thus there is no ensuing degradation in insulation performance over time. Spacetherm should be good for 50 years without loss of performance, I am told.

The embodied energy is less than most insulation alternatives other than wool.

I asked him about the insulation value of Spacetherm vs (say) blown foam. Sam suggests that it is up to twice as good, ie a given thickness of Spacetherm will reduce heat loss by as much as twice that the same thickness of foam will. That at a cost of maybe 2.5x for the same overall insulation performance. So there's a significant cost premium if you have space for alternatives. But where space is the premium then Spacetherm may well be valuable. (1m^2 of 9mm Spacetherm blanket might cost GBP25, vs 20mm drylining backed by plasterboard at maybe GBP10 for example.) 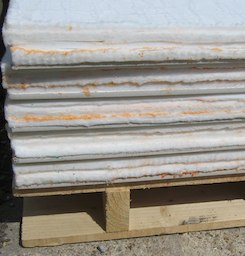 I am testing out Spacetherm-P (plasterboard faced). We speced out dry-lining our living room to get its exterior-wall U-value from somewhere between 1 and 2W/Km^2 where it is now down to something closer to modern building regs at 0.3W/K^m2, using conventional Kingspan Kooltherm K17 rigid phenolic insulation with thermal conductivity 0.020--0.022W/Km. Then we adjusted the spec to replace the K17 with Spacetherm-P (0.013W/Km core), and we'll see how easy the material is to use and how well it works in practice. Full write-up here...

In April 2013 I took delivery of some Spacetherm-F Fermacell-faced 40mm aerogel. Fermacell should be stronger than the -P (plasterboard) version. The builders hated this even more than the Spacetherm-P and Magnaline, citing the following issues:

Some responses in an eBuild.co.uk thread.

Kitchen north wall construction now (assumed for east also) calculated to have a U-value of 0.24W/Km^2. No obvious condensation risk with interior 18°C@70%RH and exterior -2°C@100%RH:

(The area behind the existing gas boiler has not been touched. The aerogel will be applied when the boiler is replaced.) 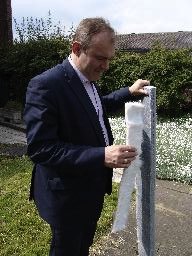 The product that Proctor brands in the UK as Spacetherm is originally Aspen Aerogel's Space Loft. Other firms use brands such as Spaceline and Magnaline.

According to "Saint" at GBF:

The reason that the aerogel sometimes grabs the drill bit is because the polyester reinforcing in the insulation melts at high temperature. So once the drill bit gets hot it sticks to the bit. The secret is to drill the holes ... quickly avoiding the bit overheating too much. Use a new bit, set the drill on hammer if necessary, and go at it with some gusto pulling the bit out as soon as possible.

In theory one type of insulation that can beat aerogel on performance, ie the amount of insulation value per unit thickness, is "VIP" or Vacuum Insulated Panel. You may well have VIPs already in your fridge/freezer.

A VIP is a rigid air-tight unit with all the gas pumped out, thus a vacuum inside. The unit may contain aerogel or glass fibre to help resist the inward air pressure. A vacuum more or less eliminates heat transfer by conduction and convection for example. Radiation can be mitigated with reflective surfaces, as with a vacuum flask.

But VIPs are expensive, will eventually leak and fail slowly, and cannot be cut to size. And, well, if anyone puts a nail or screw into one, its performance is toast...