We like growing pumpkins in our tiny garden. Three or four run amok, looking like an alien invasion bearing a riot of huge yellow flowers. Usually three-ish gourds survive the slugs to become pie and Halloween lanterns!

(The nasturtiums usually get jealous in autumn and scramble over the top, giving us a little suburban jungle right up until frosts hit.)

We all have the fun of watching them planted as seeds in about April, fighting off cats and sometimes huge Spanish slugs (the only things meaty enough to try chewing the hairy stems), and then as food it's pretty green (while being very orange) as it doesn't clock up any food miles to reach our plates.

Fruits of the Cucurbita are said to be good sources of nutrients including vitamin A and vitamin C, so healthy veggie nosh to boot.

Jean Ryder advises on growing, recipes and making lanterns below...

How Do I Grow a Pumpkin From Seed?

Plant one seed per pot in April, keep covered and warm (eg in a greenhouse), and plant out in June once frosts have gone and the plants are strong, and are beyond the initial two seed leaves.

You can surround the seedlings upon planting out in the soil with egg-shells to deter slugs. That or nuclear weapons...

Once a fruit has formed/established on each plant, trim the vine to concentrate the plant's efforts on that one.

Harvest in September, or when the vine has died.

How Do I Cook Pumpkin? 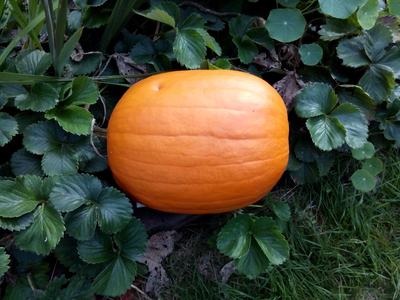 Pie (takes patience, but is worth it!): Pumpkin Pie (Waitrose Food magazine 2015). Starts with 700g of pumpkin (or butternut squash) flesh, takes a couple of hours, and serves eight.

A deliciously rich pumpkin soup. Pumpkin, carrots and onions are roasted, before being pureed with cooked potato, stock and double cream. Serve with a dollop of cream and crusty bread.

This one starts with 750g of pumpkin, two carrots and two onions, is ready in a couple of hours all told, and serves six.

You can also just roast the flesh, which is delicious and probably the lowest-carbon treat!

If for some strange reason you don't have good use for kilo upon kilo of yummy pumpkin on the day that you harvest it, you can just keep the pumpkins in the kitchen as we do, and/or you can directly freeze the flesh (roughly cubed) from the gourd.

How Do I Carve Pumpkin? 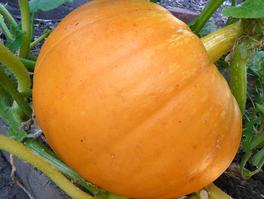 Slice a lid off, use a metal spoon to scoop out the seeds, extract the flesh if you want, draw your chosen image on front, and then use a sharp knife to cut it out. Put a candle (real or fake battery-operated) inside, and put the pumpkin outside to wow your visitors.

All the bits that don't get eaten, and your carved lantern when finished with, will make fine compost bin fodder!

Probably as good family fun goes this is pretty low-carbon, and environmentally benign, and thus green. Even when it's orange.

So maybe we should coin a new joke that runs something like:

What's big and orange and green all over? ... A pumpkin! 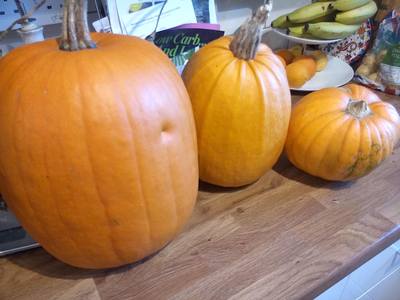