Ask your Green Homes Grant installer to consider Radbot as a secondary measure.

Earth Notes: Bats Around our Home aka 16WW

Cheat podcast episode! Bats on the Hogmill River a few minutes' walk away:

Notes on Bats at 16WW

I am happy to say that there are lots of bats around our home. Mainly common pipistrelles (Pipistrellus pipistrellus) it seems, maybe a soprano pipistrelle or three. They can be seen flying at about bedroom window height against the dusk and detected by their feeding and social calls. Feasting on mosquitoes and other insects.

Here are 16WW Chiroptera notes, sounds and images, and anecdata, with some exposed slightly more formally as a dataset.

Some bat chat with Alison Fure and a couple of bat detectors just outside the far corner of our garden in the alleyway, then up the alley and round the front:

Also, spectrograms (aka sonograms) and log files mainly from the night of 2020-09-17, captured by a static bat detector in the tree in 16WW's back garden (west side) close to where the loudest signals were heard a few days before:

It shows really what we know that there is a common pipistrelle but it appears to have set up a mating roost (possible interpretation) and is song flighting. This means it is fairly constant activity all through the night. There was one soprano pipistrelle also.

There is some interference which is CF around 25 kHz that begins around 3.20, there is a bat that can do that but it would be exceptional to find it there.

I tried a few times to catch them, and at just before 8pm BST they appeared.

One or two (presumably common pipistrelles, Pipistrellus pipistrellus), at 45kHz on the detector), flying back and forth along the terrace over the back gardens, close to the houses.

They were obliging me with low passes only 1m or 2m directly above the detector on the garden table in front of me!

I have rarely seen a bat so close up, framed against the nearly-dark sky!

I captured four samples on the field recorder, the first quite faint. 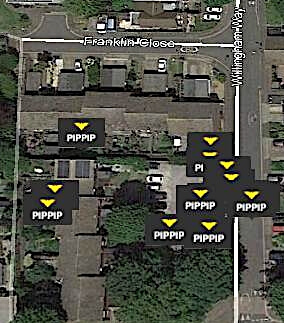 While participating in a webinar 7pm to 8pm BST, I also had the bat detector at my open front east-facing window (at 45kHz), and detected feeding activity.

Out the back for a few minutes a little after 8pm I didn't detect anything.

A little before 9pm, on the grass at the entrance to Willingham Way with Alison, I heard a few more bat passes for feeding. Alison said that there were no social calls.

As the weather is likely to take a turn for the colder and wetter now, this may almost be the end of bat detection for this calendar year here.

I opened my front window just before 7:43pm BST and I quickly detected feeding! Two or three passes in as many minutes. Common pipistrelle I think.

About 8:15pm I stepped out the back door and almost immediately heard a new bat, clearest and babbling on ~39kHz, which may just be a Nathusius’ pipistrelle (P. nathusii). Difficult to be sure with current heterodyne device, and given that I know nothing about this topic!

I have briefly tried out the new fancier frequency-division (FD) detector (Batbox Duet) that I have been lent.

With the Duet I picked up what sounds like a solo common pipistrelle out the back too.

I think that recording directly from the "tape" output into my MacBook (FLAC stereo at 48ksps) may be good. The left channel is input frequency/10, the right is heterodyne with whatever frequency I select with the dial. The input frequency range is 17kHz to 125kHz. At the very least I may get some pretty spectrograms/sonograms!

Recording directly to the MBA is nixed by it not having an analogue mic input! So I have ordered a 3.5mm stereo jack-to-jack cable from Duet to Olympus field recorder. (Thanks again Deniz for the recorder loan!)

Amazingingly, even though the cable order only went in after 9pm, it arrived next morning with an earlier order of PP3s (9V alkaline batteries) for the detectors.

I opened my front window just before 7 BST and heard a faint suggestion of a solo common pipistrelle.

I went out the back for 5 minutes and heard nothing.

Out of my window at ~7:10pm a faint signal again, a pass or two... The Duet and LS-P4 field recorder combo has captured about 5 seconds:

The left channel is the original frequency / 10, so the pipistrelle should appear somewhere around 4.5kHz. The right channel is 45kHz heterodyne.

There may be stuff going on above 80kHz (8kHz in the above figure), as the Duet detects up to 125kHz (12.5kHz in the second spectrogram image). But it looks to me as if it could mostly be noise or aliasing. In any case, I should probably set the spectrogram default to better match the Duet, at 12.5kHz!

There was another teaser brief pass at ~7:50pm BST, while typing this up, not captured.

At just after 7pm BST I opened my front window and ~7:05pm heard a pass.

Just about the moment that by MacBook automatically switches to dark mode, which may be a big visual clue to break out the bat detector! I think that I get clipping in the right (heterodyne) channel whenever there's a bat pass, which may make searching for them quicker!

Had the Duet set up recording shortly after, and another faint pass ~7:08pm.

The field record is occasionally flashing the "peak" light, which suggests that maybe I should turn the (manual) sensitivity down to low. Done by 7:15pm, missing a faint pass or two.

There are plenty of insects around, some coming in my open window...

Before I finished listening a little before 8pm, I had heard many passes.

About the clearest pass from the first (just before 5 minutes, with a little raspberry blown about 2s in as something is caught) is:

At some times (eg at minute 7 in the second recording) there seems to be more than one bat present.

One way to reduce the somewhat painful background hiss is to split out out the left (FD/10) channel as mono, then apply a Filter Curve with a band pass of 1kHz to 6kHz (10kHz to 60kHz original, maybe the latter should be higher), with fairly steep cut-off.

I think that some ultrasonic interference is picked up from my laptop when typing.

In order to be able to repeat MW's segmentation for his manual analysis of a few days ago, I installed SoX on my Mac with:

I used ffmpeg to retain just the left (frequency-division) channel and convert to mono (I converted to FLAC first, but it could have been done in one step I think):

A low bit-rate MP3 was made from each with:

Starting just before 7pm BST, a little over an hour close to 16WW with many bats, maybe more than 10. Lots of common pipistrelles, but sopranos and maybe a Nathusius also around.

Apparently the 'social' calls of the common pipistrelle are also 'anti-social', used this evening to drive away the sopranos apparently!

There's a bit of extra crunching noise from me walking around, and some break-in from me chatting with a couple of people I was with. The chat sounds somewhat like a badly tuned short-wave radio.

I had a quite clear view against the sky of bats patrolling back and forth. A couple of times one passed right in front my face, low and fast!

Raw mono frequency division output only from the Batbox Duet:

(The heterodyne frequency on the Duet was kept at ~20kHz most of the time, in the hope of catching a Nathusius, though in the end I listened to the FD channel almost exclusively, via the field recorder.)

It's raining this evening, so I'm not expecting much activity to end my bat-induction month with!

But close passes at 7:14pm BST, 7:21 and 7:22, when I had the bat detector at my open front window for about 20 minutes, suggests that they bats still didn't get the memo.

Opened the front window at 7:10pm BST, and almost immediately had a faint pass! It's about 12°C out, so the window isn't staying open very long tonight.

Closed window because I was getting cold at 7:30.

I switched to the field recorder and the Duet just after the 7:12 pass, with the heterodyne set to 20kHz.

Some excerpts from the full recording:

Opened the front window at 7:04pm BST. It's about 10°C out. Not expecting activity tonight.

Opened the front window at 6:45pm BST, checking for earlier activity. It's about 13°C out.

Closed window at 7:10. (Getting cold, and joining a webinar!)

Tonight's first treat was to see a soprano pipistrelle release. Then later, by the Hogsmill, to hear at least one completely new species!

A busy minute from about 7:25pm with continuous activity and multiple bats (FD channel bandpass filtered 1500Hz to 7500Hz per MW's suggestion):

More-or-less the whole half-hour-ish (37 min) at the Hogsmill starting from approximately 7:10pm, bandpass filtered and downsampled to 16ksps to save bytes (~50% for the FLAC):

Closed window at 7:10. (Getting cold, and already in a webinar!)

I haven't been able to make dusk observations for the last couple of days.

It sounded like the ones around 6:25 were successfully catching insects.

Plenty of visual contact around 6:30, with some swoops very close!

Mainly one solo (common?) pip back and forth above our garden and nearby. Often very clearly visible against the sky, maybe ~2m above ground level.

I ended up with two recordings by accident (accidentally stopped the first).

(Will test using FD channel only, bandpass 1.5--7.5kHz, downsample to 16ksps, store as FLAC and mono mp3, to store efficiently with minimum loss of fidelity.)

As well as the Duet, I had MW's audiomoth recording broadband (192ksps), here being a common pipistrelle:

The heterodyne MP3 file was generated by mixing a 48343Hz sine wave with the WAV file because 48343Hz was the peak in the coefficients of a fast fourier transform of the WAV file.

The WAV files were converted by me to FLAC for more efficient (but still lossless) storage and serving.

(The AudioMoth was picking up some of the Duet het-downshifted output too, as they were close together on my garden table near the house.)

An approximately matching sample from the Duet with FD10 and ~45kHz het:

The Batbox Duet was generally pointing towards the back of the garden, though I did somtimes walk with it a few steps and point it. The AudioMoth stayed stationary, with its microphone pointing straight up.

Here is another broadband pass sample.

Later, near 16WW, MW captured a Myotis with its much more vertical and wider-bandwidth frequency sweep (with heterodyne):