Updated 2020-05-07 23:51 GMT.
Learn how my first home-grown VAWT with real generator was more "lawn art" statue than power-house turbine... #wind #microgen
See: London Home Solar Power PV Pilot Project (2007)
This experiment was an attempt to upgrade from a fairly-free-spinning cereal-box "yard art" toy VAWT (Vertical Axis Wind Turbine), to a larger box on a real generator. Actual energy output was a secondary consideration to getting something physically stable and safe, that would turn at all and/or in light winds. It didn't work.

This was part of my urban wind-power pilot project.

Did an urban VAWT work for me?

Would any simple fix to the VAWT have helped?

No, almost certainly not. The gap from pretty lawn-art to consistent generation is too big.

How did the VAWT experiment finally end?

I gave the generator away 2015-01 when I realised that I would never get anything useful out of it with my conditions. Thanks for taking it off my hands Ben M! 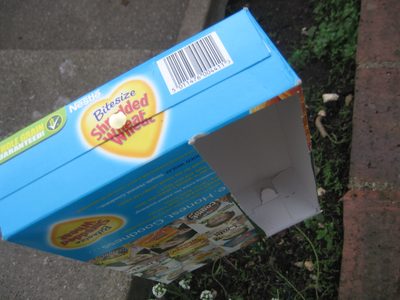 For this design/implementation I visited various local DIY/tool shops. I acquired nearly a grown-up haul of G-clamps, mallets, roofing bolts, etc, since I needed some extra tools (eg hand-drill and modelling knife) and some newer widgets to make a supporting structure for the generator. The generator is large (7kg, 17cm/7in diameter) and had its three power wires emerging from the centre of the spindle. 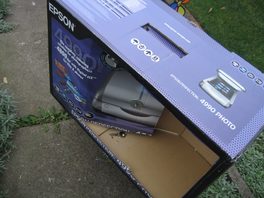 The generator is from FuturEnergy. Handily, I encountered them with their PM gen and HAWT (Horizontal Axis Wind Turbine) at their booth at a trade show a few days after the generator arrived (and had puzzled me). I could see that they were letting the generator's internal bearings take all the load in their turbine design, thus I can do the same.

The first thing I did was to make a support for my PM gen to allow me to build the rotor on top for a VAWT configuration. Cunning use of a plank of wood, two G-clamps, and two angle brackets to grasp the flat on the PM gen shaft, take the weight on the end of the spindle, and prevent rotation of the the spindle and its emerging wires. This allowed the body to spin above it on the generator's internal bearings, with the rotor to be bolted on to and above the generator body. It may not last but it is reasonably sturdy for experimental purposes...

This also for the first time allowed me to test when I might get cut-in to charge a 12V battery. I used my analogue multimeter on 'AC Volts' across one pair of the delta-wired outputs while I turned the spindle by hand. My estimate is that bridge-rectified output will pass ~13V--14V at ~120rpm, which is probably just about reasonable for a drag-based VAWT design.

Shorting any two of the output wires makes the spindle very hard to turn, indicating that the generator is extracting the mechanical energy efficiently.

Then I attached my biggest-available box (from my scanner) to the PM gen. I cut the vertical slots as for my smaller cereal-box rotor.

Unfortunately the cogging and torque required to start up rotation was too high for conditions on the day. A larger/flatter box is probably necessary for this to turn in low wind speeds. Maybe 1msq minimum swept area and possibly at least a metre for enough torque.