Updated 2020-06-24 20:19 GMT.
Using my SS-MPPT-15L solar charge controller as a smart remote battery monitor.
See: On Website Technicals (2020-07)
My off-grid RPi measures nominal 12V 'battery' voltage near itself with a plug-in ADC card to estimate how charged the battery bank is. From that it works out if it can run extra jobs, or has to conserve. But even the relatively short run from battery in the shed outside to the RPi in the house drops enough voltage to make that estimation difficult. This is especially hard when taking extra load from the grid onto the battery. An elegant fix is to take readings from the smart solar/battery controller, calibrated and very close to the battery...
See also:

Measuring Battery Voltage at the Bank

2016-08-08: I will try to measure battery voltage at the battery using the SS-MPPT-15L controller over MODBUS over RS232. So I will be ordering a PC MeterBus Adapter. This should largely eliminate the effects of voltage drops in the supply cables when estimating SoC (leaving genuine sag from the battery bank itself). This should also allow measuring (some of) the power flow into the bank, and out to the loads. The are various solutions for having the RPi talk MODBUS to the SS-MPPT-15L though I may prefer to keep everything in C for efficiency and use the LGPL libmodbus (see RPi build notes).

(Minutes after finally relenting and buying the Meterbus RS232 adapter that I had been considering for years, and working out how to interface it to USB for my RPi for example, I noticed that there is a USB version of the Meterbus adapter which would be simpler and probably more power efficient. Oh well.)

2016-08-10: Meterbus adapter arrived today. Got slightly spendy on a 5m FTDI USB 2.0 Cable Male USB to Male RS232 to reach directly from my RPi to the battery bank. (Possibly I should sheathe the cable with something UV resistant to protect the 1m or so outside, exposed to direct sunlight.)

I will first try out the connection to the SS-MPPT-15L from a Windows laptop using Morningstar's MS View application to try to maximise the chance of success. 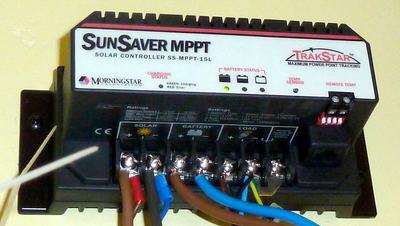 Then I will probably put together a stand-alone C or C++ program to access the SS-MPPT-15L from the RPi. This may continue to be used to gather stats beyond those needed for the power management function.

Finally I will aim to integrate the MODBUS code into the powermgr code. There may be an interlock between this and the stand-alone code above to help avoid clashes.

2016-08-12: FTDI USB/Serial cable arrived, MS View tested on W10 laptop, all seems to be working with a couple of small surprises: the controller "hourmeter" is reading over 60,000 (installed 2009-09); and the 1st CS panel just apparently in full sunlight was showing ~120W rather than nearer nameplate even allowing for some very minor shading, probably because the battery is near enough full that that is all it can absorb. (Array power has been dropping steadily, and voltage rising over Vmp.)

Tested MODBUS access in stand-alone MODBUS access C++ source code, then integrated enough to fetch controller's (smoothed) notion of battery voltage in place of value measured at RPi. Lots of other things may need tweaking, eg assumptions about slump under load. It will also be good to gather load wattage and display it.

Smoothed/filtered battery voltage as seen by the controller now being used in powermgr ~9pm. Locally measured LA/supply voltage being logged as 'Vbus', and can be used as a fallback in case of loss of comms with the controller. (The MODBUS connection seems slightly unreliable, so my code has built-in reties and pauses to improve that. But I'd still like the system to work reliably if, for example, the MODBUS link fails entirely, eg the plug is yanked out.)

2016-08-13: now computing effective load power (from battery volts and load amps) and added them to the log for display. The difference between battery voltage and supply voltage seen at the RPi shows (eg) 0.5V drop at 70W (Mac recharging), or 100mΩ supply impedance. Possibly time to swap out that fuse for another DC circuit breaker. (The 20A MAXI fuse should only be ~3mΩ.)

Generation from the 510Wp array (A1P) starts about 30 minutes after official sunrise (05:48 BST, 04:48Z), and drops to zero about 30 minutes before official sunset (20:22 BST). (Note that this array is on the west of the house and in shade early morning.) According to the controller it generated/collected ~500Wh during the day.

2016-08-19: a pretty cloudy day but ~200Wh captured by the primary array; compare with the grid-tie generation graph below. Here it is fairly evident that generation/capture is not being limited by the controller or the battery or the load.

2016-08-23: a good generation day with no interruptions. The battery rises very fast to absorption over ~90m. About 500Wh is generated off-grid with no manual loads added; the small automatical software based 'dump' load is visible ~10:00--15:00Z.

2016-08-25: MODBUS is proving to be a bit flaky at the moment. I increased the number of retries from 3 to 4 last night but it made the problem worse, with more drop-outs. In this case most obviously to locally-measured voltage (Vbus) rather that the battery voltage measured by the SS-MPPT-15L.

I have put a simple wrapper around the single-register read in its own file to cache the libmodbus context (etc), as closing/freeing and reopening didn't actually seem to help much. I will have to see if that is more reliable, though I am still at a loss as to the underlying failure cause given a clean opto-isolated USB/serial link from RPi to controller.

An initial problem was results getting mixed up between different registers, apparently picking up data already on the wire from a previous request. I have added some flush calls to attempt to mitigate that issue.

To try to avoid some (initial) read calls timing out, a 750ms delay after 'connecting' seems good (500ms not enough):

Today's snapshot of the code does seem to be reasonably reliable for MODBUS again.

2016-09-25: improved code that has been working well for a while now that is much faster after the first call and does not open() the underlying device multiple times:

2016-10-01: sampling power parameters every few seconds shows that numbers can change fast. There was rain, cloud and sunshine in the log of ~5s samples captured with powermng -nl and graphed below with gnuplot -e "infilename='fast.dat'" -e "outfilename='out/fast.png'" -e "xafmt='%H%M'" graphing/gnuplotBattVRPi.txt supporting the old joke that if you don't like the British weather then just wait ten minutes...

Note that the battery voltage is smoothed over ~25s, the charge and load power ~1s, and Vbus not at all.

Another sample, after sun-down, showing the fairly variable and spiky load from networking and laptop (and RPi, a little).